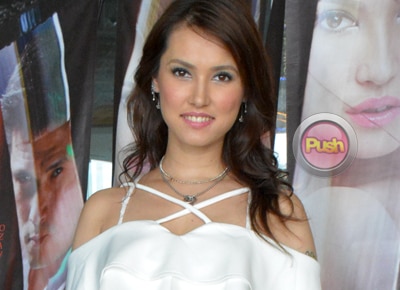 Former adult film star Maria Ozawa remarked that she is enjoying her stay in the Philippines. “It’s great. I like everything about the Philippines. The food is great.” The Japanese star is currently in the country to promote her upcoming Metro Manila Film Fest movie with Robin Padilla titled Nilalang.
In a one-on-one interview with Push.com.ph, Maria said that she is really excited to start working with Robin on the film. She shared that she has always wanted to star in an action flick. “First of all being in an action film or a horror film is like a dream come true so I was instantly okay. [When] I heard that I’m doing this film with a great star in the Philippines, he’s like an idol, right, so I was really excited [that] I’m filming with him, so excited, so I was just like okay like in one second.”
But the Japanese star admitted that she was actually a bit scared initially when she was offered the movie.  “I haven’t really done this big movie before and I really don’t consider myself as like a good actress. I haven’t done that much experience so I was really worried that I’m going to embarrass myself so I just have to take the chance.”
She relayed that they will be doing lots of martial arts in the movie. “I love martial arts and I think we are going to use lots of martial arts in this movie so I’m really excited to do lots of actions and horror scenes and maybe a little bit of like love, romance.” On her first impression of Robin, she commented, “He’s really buff, like muscular so that's really sexy.”
Maria is set to undergo training for the movie. “When I go back to Japan next week, I’m going to learn martial arts [so] I could do the sword acting. Then I have to learn how to move in the action films. I have lots to prepare.”
Celebrity