Edu Manzano to stars who are wannabe politicians: 'Participate in debates'

Edu Manzano is not sure he will be running again next year. 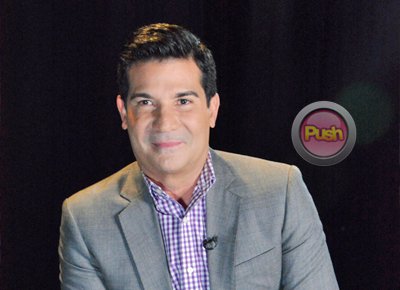 It seems that actor-turned-politician Edu Manzano is not very keen on running again in the political race that is set to happen next year.
However, this didn't stop Edu from sharing his two cents on how stars should conduct themselves once they enter the political arena.
Edu said in a recent interview at Ricky Lo's column for Philippine Star, “First, I would like to remind the public not to vote for any candidate who refuses to answer their questions in public forums. For my showbiz colleagues who are planning to run in 2016, I advise them to participate in debates so that the public will be educated on what their platforms are.”
Edu served one term as a Vice Mayor in Makati from 1999. He then attempted to run for the mayoralty position in 2001, but lost to now Vice President Jojo Binay.
His political intentions took a different turn in 2004 when he became the first chairman of the Optical Media Board, a government agency tasked with combating optical media piracy. He resigned from the said position in August 2009. Then in 2010, Edu once again tried his luck in the political scene when he sought for a higher position, at that time as vice president and running mate of presidential candidate Gilbert Teodoro. The two unfortunately lost that political race.
Will he run again?
“If invited…maybe. But look, ang gulo na ngayon…," he said in the interview.
If there's something that his foray into politics has taught him it is to learn to put yourself out there, to the public.
“I believe that I did not make any mistake. I participated in forums, I campaigned vigorously. I was able to adequately answer in forums among students who always asked the hardest questions. That’s why I advise my colleagues to do the same… participate in all forums. I encourage schools to organize forums before the 2016 elections," he said.
Meanwhile, another point of controversy that he addressed was current OMB Ronnie Ricketts's situation in the agency he formerly headed.
It was just last year when the Office of the Ombudsman ordered Ronnie's suspension along with four other OMB officials on account of "neglect of duty." Later on, Ronnie faced a case for his supposed violation of Section 3(e) of Republic Act 3019 or Anti-Graft and Corruption Practices Act.
“Ronnie filed a motion for reconsideration but it was denied by the Ombudsman,” Edu said, adding that Ronnie’s term expired in March 2013. “Sana Pres. [Noynoy] Aquino appoints a new OMB head.”
According to Edu, his passion to have the case resolved stems from the fact that the four people who were suspended together with Ronnie served under his term in the agency.
"They have been serving the agency for more than 20 years. I asked Ronnie to help them, give them a lawyer, but nothing happened," he ended.
Celebrity