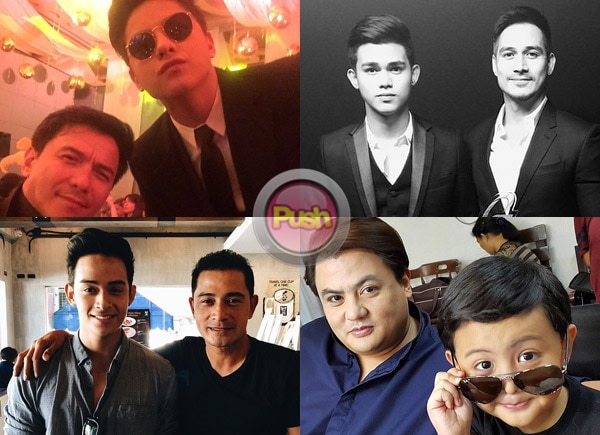 In honor of Father’s Day, Push.com.ph lists down 6 celebrities who are following in their fathers’ footsteps. They are indeed, like father, like son.
1. Rommel and Daniel Padilla
Since the early ‘90s, Rommel, from the famous brood of the Padillas, has starred in several action movies such as Col. Billy Bibit Story, Totoy Golem, Kahit Demonyo Itutumba Ko, Hari ng Selda: Anak ni Baby Ama 2 and 10,000 Hours, just to name a few.
Like him, his son with actress Karla Estrada, Daniel, also entered show business. After several blockbuster movies and hit series, Daniel is now being referred to as the Teen King, opposite Teen Queen Kathryn Bernardo. He landed lead roles and starred in teleseryes like Princess and I, Got To Believe and now, the remake of Pangako Sa ’Yo. Some of the movies he did includes Must Be Love, She’s Dating the Gangster, and Crazy, Beautiful You, among others. He also launched recording albums and held his third concert at the SM Mall of Asia Arena just last Saturday, June 13.
2. Niño and Alonzo Muhlach
Nino Muhlach, who was dubbed as the Child Wonder of the Philippines, did several movies and TV shows while growing up. Now, it is his son’s turn to become the next child wonder which he fully supports.
According to a PUSH report, Nino opened up on Tapatan ni Tunying that he does not want to deprive his son of the good things he experienced because of show business. Hence, he allowed him to become a child actor.
Alonzo recently starred in the Kapamilya series, Inday Bote and Wansapantaym Presents: Yamishita’s Treasure, as well as in the movie, My Big Bossings.
3. Piolo and Iñigo Pascual
An award-winning actor, Piolo Pascual starred in movies such as Esperanza the Movie, Dekada ’70, Til There Was You, Don’t Give Up On Us, On The Job, and Starting Over Again, among others. The most recent primetime series he did was Hawak Kamay.
Following his father’s showbiz career, Inigo Pascual has been given big movie roles this year namely, Crazy, Beautiful You and Para Sa Hopeless Romantic. In a PUSH report, Inigo said that he follows his father’s career advice.
4. Diego Loyzaga and Cesar Montano
Veteran actor and director Cesar Montano did historical and socially-relevant films which garnered him acting awards locally and internationally. This included his portrayal in the movies, Jose Rizal, Bagong Buwan, Muro Ami, Panaghoy sa Suba, and El Presidente.
Meanwhile, his son with actress Teresa Loyzaga, Diego is trying his luck in show business, too, and has appeared in Mirabella, Wansapanataym and Maalala Mo Kaya episodes, Growing Up and Mara Clara remake. However, his biggest break so far was when he got a supporting role in the recently concluded primetime series, Forevermore.
5. Benjie, Kobe and Andre Paras
Just like former PBA player Benjie Paras, his son Kobe is also a basketball star. In fact, Kobe, who committed to play for the University of California Los Angeles (UCLA) Bruins when he enters college, won the 2015 FIBA 3x3 Under-18 World Championships dunk contest a second time.
While Kobe seems to be pursuing his father’s basketball career more, Benjie’s eldest son Andre, though also plays the sport, followed his basketball player-turned-actor dad’s showbiz path. Like Benjie who was seen in the Kapamilya primetime series Nathaniel, Andre became part of GMA Network’s TV shows and Viva Films’ Diary ng Panget.
6. Mark Anthony and Grae Fernandez
Like actor Mark Anthony who became part of the Gwapings, his son Grae also became part of a boy group called Gimme 5. While Mark starred in shows like Palibhasa Lalake, Kabilin-bilinan ng Lola, Pare Ko and Istokwa, Grae is now trying his luck in acting. He is currently appearing in ABS-CBN’s remake of Pangako Sa ’Yo.
Celebrity