According to Kris’ IG post, father and son had a chance to mend things with each other. 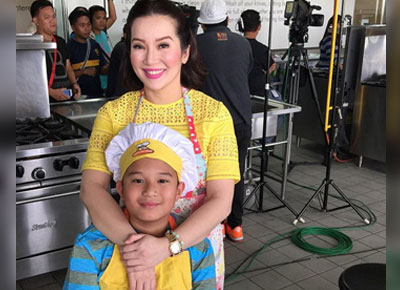 After answering a question coming from an Instagram follower regarding Bimby going to an awards night without his father James Yap, Kris Aquino revealed that Bimby was upset with his father.
The Queen of All Media today took to Instagram  and said that she encouraged her youngest son Bimby to give his father “a chance, to get to know each other better, to get closer, and in the end both of them will benefit much from having a bond...”
She also shared that all throughout the Kris TV summer special, the staff edited out scenes where Bimby “innocently mentioned the 'issue' it was all edited out & I did exercise so much self-control when clueless know-it-alls would comment about how I was raising my children.”
Kris made another post a few hours after, this time a collage of pictures of her taping of Kris TV with her sons and James.
Apparently, all’s well that ends well as Bimby and James made up during the Father’s Day episode.