Liza has received two necklaces and two bracelets as gifts from Enrique, among others 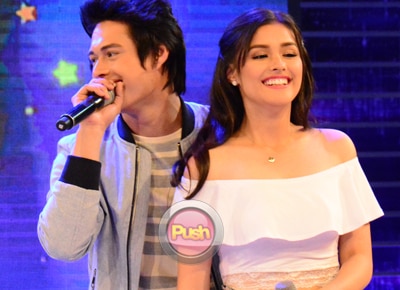 They’re not official yet but Enrique Gil has apparently showered his onscreen love team Liza Soberano. With a bunch of gifts.
It may be recalled that Liza recently confessed that she and the King of the Gil performer already have a mutual understanding.
The Just The Way You Are actor for his part confessed that he has already fallen in love with Liza and that he has already told her about it.
During their appearance on Gandang Gabi Vice’s Sunday episode, Liza shared that she has received a bunch of gifts from Enrique.
Until now though, Enrique has yet to confirm that he is courting Liza. For Liza, courting someone meant giving her flowers and chocolates.
She revealed that was what Enrique did when surprised her with roses, a stuffed toy and a necklace last Valentine’s Day. But then Liza was quick to dismiss that it meant something since else, as she says, Enrique didn’t verbalize anything at that time.
Earlier than that, Enrique gave Liza another necklace which had the letter “H” on it to represent the young actress’ real name Hope.
But Enrique’s first gift for Liza was actually a blue bracelet from Paris.
Other than his first gift, Enrique gave another bracelet to Liza and then a bag, a wallet, a watch and perfume.
“Hindi po kasi nung Christmas party ng Forevermore po parang may Monito-Monita. Nabunot ko siya, nabunot niya ako,” Liza shared about how she got a bag and a watch from Enrique.
She likewise denied that it was planned as they even had code names for their Monito-Monita so they had no way to know that they got each other’s names.
After Forevermore, Liza and Enrique will be conquering the big screen for the first time for their film Just The Way You Are.
Celebrity