Daniel Padilla has once again proved that he is the Philippines’ Teen King by performing to a jam-packed crowd, this time in the Mall of Asia Arena for his "Most Wanted" concert. Daniel showcased his artistry and sang his most favorite songs in front of thousands of fans last Saturday, June 13, 2015. PUSH lists down the top five “most wanted” moments from the concert.
1. Daniel Padilla performs “Pangako Sa’yo” with Kathryn Bernardo
The already pumped up crowd went wilder when Daniel Padilla got Kathryn Bernardo to participate in his “Pangako Sa’ Yo” number. The Teen King and the Teen Queen got all so cozy on stage, which made KathNiel fans swoon at the MOA Arena. Daniel sang most of the lines and it seemed that he was more inspired singing the love song with Kathryn by his side.
2. Daniel Padilla kisses Kathryn Bernardo After their “Pangako Sa’yo” performance and with the constant cheer of the fans, Daniel gave in to their request and kissed the Teen Queen on the cheeks. It was a sweet moment between the two stars, who are still very elusive about the real score between them. But judging from that kiss and what transpired on that MOA Arena stage, Daniel and Kathryn are very special to one another.
3. Gary Valenciano was impressed by Daniel Padilla Gary Valenciano became vocal about his admiration of Daniel Padilla as a performer and even tagged Daniel as the Michael Buble of the Philippines. The Teen King was overwhelmed to hear this and in exchange sincerely thanked Mr. Pure Energy. Daniel performed standard and classic songs like “I Feel Good” and “What a Wonderful World,” which showcased Daniel’s artistry even more.
4. Daniel’s duet with Morissette Amon

Morisette Amon sang her smash hit song “Nothing’s Gonna Stop Us Now” in a duet with Daniel. The two worked up the crowd to the point that they sang along with pop stars. It was a beautiful number and an amazing rendition that captivated the audience.
5. Daniel takes a selfie with his fans 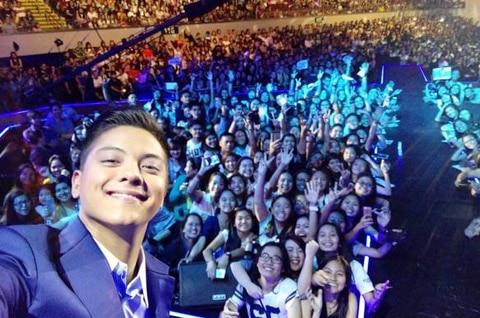 Fans got the chance to be in the same photo with Daniel as he took a selfie with the crowd during the concert. Daniel was kind enough to take the time to take a snapshot of the sold-out crowd in the Mall of Asia Arena. It was also for a campaign in support of Daniel’s “Liter of Light” project for the Aetas in Tarlac. In every retweet of the photo, 1$ will be given to the project.
Photo courtesy of @estrada21karla on Instagram
WATCH: Daniel Padilla's Most Wanted Concert: Mga kaganapan sa likod ng kamera
Celebrity