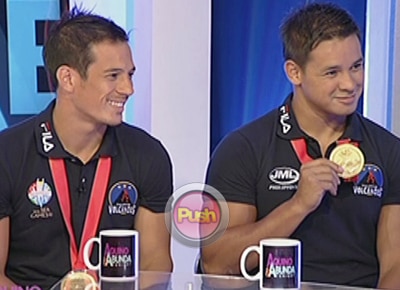 On Aquino and Abunda Tonight, members of Philippine Volcanoes—team captain Jake Letts and member Harry Morris—explained the difference between playing rugby and football. They returned from the Southeast Asian Games in Singapore where they won a gold medal.
They said that rugby, a contact sport, does not use equipment unlike football. Secondly, they said that in rugby, they can only toss the ball backwards whereas, one tosses forward in football. “The reason for that is that in order to score, you have to run,” and added that rugby is a continuous game.
Because rugby requires a lot of contact among its players, host Kris Aquino asked if they ever broke their noses while playing, to which they said that sometimes, players encounter accidents.
Lastly, Kris asked why Harry appears buffer than Jake who is lean. Jake said that rugby is a game for all body types and that he is mostly running around.
Celebrity