Queenie Padilla, happy to be a ‘wifey’ 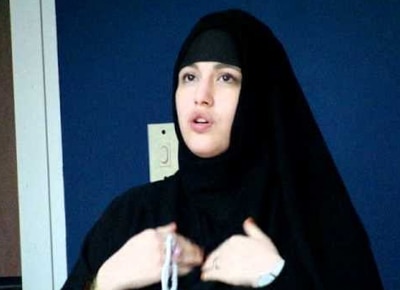 Queenie Padilla, the eldest daughter of actor Robin Padilla to Liezl Sicangco, now enjoys her life in Dubai with her non-showbiz husband. She first dropped a hint of her marital status by putting the word ‘wifey’ in her Instagram bio followed by a photo of her and her husband walking hand in hand uploaded on her public Facebook account with a description “I still remember that moment like it was yesterday.... ?#?hubby ?#?nikkah #2012”. This made the netizens think if Queenie was married since 2012.
"I've been [married] since September 2012." She confirmed to entertainment site Pep.ph. The actress left the entertainment industry last 2011 and managed to keep her life very private. She didn’t elaborate many details about her life as a married person but she shared on her first blog post her experience as a Muslim woman.
“When I read a script I was like a thrilled kid reading the description of the packaging of a new toy. It was music to my ears when I heard the director yell ‘action!’ but after ‘cut!’ I was unhappy,” she said.
She also said in her blog post that she is “not fond of the pretentiousness of the glitz, glamour and the masquerades” hence her decision to quit showbiz.
The former actress also shared that she found inner peace and direction in life when she switched to Muslim religion.
Queenie is currently in Spain with her dad.
Main photo credit: Youtube.com
Celebrity