Iñigo Pascual reveals what he admires the most about Julia Barretto

Inigo Pascual says Julia Barretto is someone he can trust. 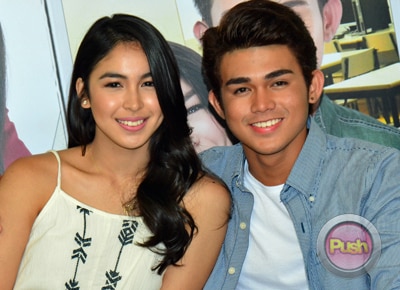 Iñigo Pascual said that he immediately became friends with Julia Barretto and that they really got comfortable with each other easily when they first met. “The first time I met Julia parang she’s far from what I expected parang I didn’t know how to approach her. I mean nothing bad pero I didn’t expect her to be so down-to-earth and so humble na I didn’t expect her to ask me to hang out with her right away na parang we were already talking about hanging out and we had common friends so it was just really fast and we became super close.”
Even when he was still in the United States, Iñigo shared that he used to talk to Julia already. “And when nasa States pa ako, I would tell her I really wanted to be an actor but at that time my dad was really not letting me and I had so many insecurities and she’s the one who was telling me na ‘You can’. Even until now she helps me in a lot of stuff pag natatakot ako, when I’m nervous even when it comes to talking.”
Iñigo revealed the qualities he admires the most about the young actress. “The best thing about her, she’s like I think someone you can talk to about anything and someone you can trust a lot about your life like and since she comes from the same background, we're going through the same thing. I think Julia, she is the best person to come to when I have any problems. I can call her anytime.”
The young actor relayed that his team-up with Julia really works because they really trust each other. “With Julia sinabi ko before ‘yung ka-love team mo siya ‘yung tao na you trust with a lot of stuff because you guys are going to be together everyday and you guys are going through a bunch of stuff na parang if may problem dapat ‘yung kasama mo palagi, dapat nasasabihan mo agad so trust really work.”
Celebrity