Manny Pacquiao on his bout with Floyd Mayweather Jr: 'I thought I won the fight'

Floyd Mayweather Jr. wins the fight of the century via unanimous decsision. 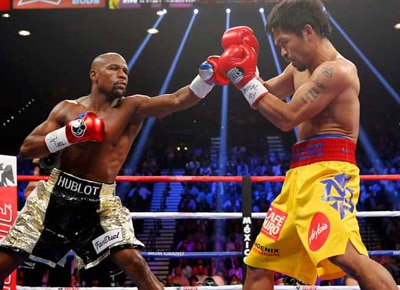 After 12 rounds of boxing in a jam-packed crowd at MGM Grand Arena, Las Vegas, Nevada, Floyd Mayweather Jr. defeats Manny Pacquiao. With the final score of 118-110, 116-112 and 116-112, in favor of Mayweather, the American boxer remains undefeated with 48 wins and 0 loss after his bout with the Filipino boxer.
Mayweather thanks his fans in his interview after the fight. He was also all praises for Pacman's performance. The American boxer also revealed that he will be fighting again in the ring this coming September.
Meanwhile, Manny admitted that he thought he won the match. "It's a good fight. I thought I won the fight." Manny added that Mayweather was moving around too much.
Manny stressed that Mayweather's size did not affect his performance. "No it's not about the size, the size doesn't matter and I've been fighting bigger than him."
On what's next for the Pinoy boxer, he relayed that he will be taking a vacation first and Top Rank’s Bob Arum will take care of the rest.
Celebrity