Is Richard Yap open to doing daring roles in the future?

Richard Yap reacts to the possibility of playing daring characters in the future. 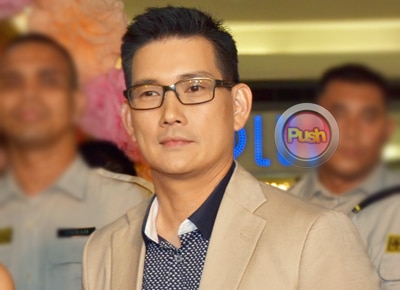 Richard Yap stars in a new movie with Maja Salvador titled You’re Still The One. The two stars have worked together before in My Binondo Girl before as father-daughter but this time it’s a whole different scenario since they are playing  lovers.
When asked if he felt uneasy shooting their romantic and love scenes in the movie, Richard replied, “Not really uneasy because we’ve worked together before and it was a case of trying to get used to the idea na we’re doing something different in this movie kasi dati nga father-daughter relationship and now it's we're having a relationship so it’s really a very big jump. We got used to the idea na ganon kami but after that okay this is what we have to so it was easy to do it na.”
Despite being paired with a younger actress, Richard said that he feels fortunate enough to be working with Maja. “It’s an honor to play the part na ganon kahit nga mas bata si Maja kaysa sa akin pero it’s been four years [since My Binondo Girl] na din. Medyo nag-mature na rin siya so pwede na rin, kasama sa trabaho talaga.”
On what she finds attractive about Maja, Richard commented, “Kasi as you can see Maja, she’s very sexy, she really has that charm and as Elise (Maja’s character) ganon din ‘yung kagandahan niya kung lumabalas don sa movie and as a person ano siya dito eh, she strives very hard to be a successful person so it’s not only physical looks, beauty with brains dito eh, ‘yon ‘yung nakaka-attract sa character.”
Now that he has showed some skin and was able to pull off some sexy scenes in the film, will he be doing more daring projects in the future? “I think it depends on the role if it’s really needed in the story kung how relevant the story really is, so it all depends.”
Celebrity