Gerphil on Ai Ai, Kris and Pilipinas Got Talent: ‘Maybe it just wasn’t my time’

Gerphil gives updates on what she plans to do after Asia’s Got Talent. 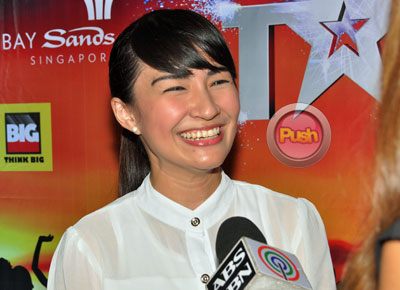 What has been life like for Gerphil Flores after winning third place in Asia’s Got Talent? The young singer admitted to Karen Davila on ANC’s Headstart that she is pressured by her new found fame.
“Medyo nakakapressure din po siya Miss Karen, kasi ang daming messages sa Facebook, and when I go out marami na din nakakapansin sa akin.”
She also related to Karen what it felt like being a finalist of the talent show.
“I felt very blessed to get into the top 3 kasi ang dami-dami namin, we were 4 pinoys, kaya alam namin na yung botohan nahati siya. And it was really hard for us in the grand finals. It doesn’t matter who wins, basta Pilipino ang manalo.”
Gerphil also admitted she was very nervous during her audition.
“During the judges audition I was very nervous. But I kept the technique. Sabi ko whatever happens, kelangan andun yung technique kahit nangangatog na ko. I was able to manage it naman kahit nangangatog na ko,” she said.
As for being David Foster’s Golden Buzzer, Gerphil said his admiration came as a surprise for her.
“I feel so honored and blessed. I wasn’t expecting to get this much recognition because of his appreciation for the craft I do.”
Currently, Gerphil and the other finalists are still under contract with Asia’s Got Talent but she plans on doing shows here in the country and abroad.
“I’m planning to, hopefully magkaroon and hopefull sunod-sunod.  Not only here in the Philippines but abroad as well.”
Gerphil is vocal that she intends to finish college as she is in her final semester at the University of the Philippines.
“I’m currently in my fifth year at the University of the Philippines, College of Music.  Five years po kasi ang music, I will be graduating this December, I have one sem to go,” she shared.
Gerphil also revealed that she’s not particular about the food she eats and said she drinks coffee a lot. Her only no-no is drinking or anything cold before a competition.
On issues she has ill feelings towards Pilipinas Got Talent judges Ai Ai Delas Alas and Kris Aquino, Gerphil clarified that she is actually thankful for her experience on the show.
"I never thought that this issue would open up again, na-resurrect siya. Sabi ko nga po sa media, wala naman akong sama ng loob for what happened. I was even thankful because I learned a lot during my journey in Pilipinas Got Talent and I know for them, bilang judges, they have their right to give out their comments on the performances they saw in Pilipinas Got Talent. Kaya sabi ko maybe it wasn't just my time, hindi ko pa yan panahon."
Celebrity