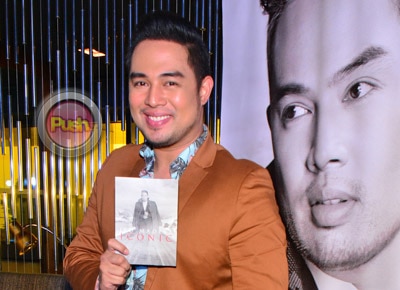 During the launch of his new album Iconic last May 23, Jed Madela admitted he was almost certain one of his biggest fears in life had come true last year while working on the project. “We started recording August of last year and I lost my voice December to January so two months yun na walang kanta. Nakaka-praning, nakakatakot but thank God na bumalik naman. Lahat wala talaga, walang speaking voice. I remember that was December 1 I was at the Aliw awards and I won Entertainer of the Year. Pero nung umakyat na ako sa stage to receive my award to sing, as in na-fi-feel ko yung boses ko slowly nawawala until nagpanic na ako. I had to call the doctor and then the next day my voice was totally gone. As I couldn't talk kahit whisper wala. As in wala talagang boses so I had to have myself checked. Nakita nila it was really swollen, yung pink dapat na kulay it was really red, sobrang pula and yung mga ugat nag-rupture,” he shares during the Iconic presscon at the Vu's Skybar and Lounge at the Marco Polo hotel in Ortigas.
The 37-year-old singer, who revives classic songs like Madonna's “Like A Prayer,” Cristina Aguilera's “Beautiful, and Toni Braxton's “You Mean the World to Me,” in his new album admitted his condition was caused by a mix of stress, fatigue, overwork, and over using his voice. “I was on total voice rest talaga. Walang salita, walang kanta, everything was text or sulat. That was so depressing for three weeks na wala talaga akong masabi. Ang naging realization ko was na tao lang ako, napapagod ako. Kasi minsan sinasabi ko sa sarili ko na parang mind over matter. It's all in the mind yung pagod. I kept singing and pushing myself and even when my body told me na tama na pagod na ako, nag-shut down na talag yung boses ko. Yung realization na yun it made me think na tao lang ako, I need to slow down and I'm not getting any younger and I have to learn to say ‘no’ kasi ugali ko kasi na pag may nag-invite sa akin na kumanta kailangan umunta ako kahit pagod na pagod na ako. So I have to learn when to say ‘no’ and when I'm tired, I have to rest,” he explained.
During this difficult time, Jed said he was not the most positive person. “I was recording ‘You Mean the World to Me’ and at time I was very intense. I was so grumpy. I was so upset. Lahat lahat siguro. Yung frustrations ko siguro kasi my voice was not that fully recovered, siyempre may pinagdadaanan sa personal life, sa career. Ako kasi I'm a very private person. I do not announce to the world whatever problems I have. I keep it to myself or I talk to my friends, my non-showbiz friends, and yun nilalabas ko siya sa mga kanta ko at performances ko. So I think fully recovered na ako third week of January. Pero wala talagang boses the whole December,” he shared.
The talented singer said that the whole experience made him appreciate singing even more. “My greatest fear is losing my family and friends. Pero siguro one of my fears talaga is to lose my voice. This is such a gift na talagang binigay sa akin ng Diyos. I would admit I kind of abused it but I'm happy na binigyan ako ng second chance para alagaan boses ko. Parang reminder ito sa akin na parang inaabuso ko na boses ko kaya hinay hinay muna,” he said.
Without singing, Jed says he would survive but he would struggle to find his true purpose in life. “Knock on wood pero meron naman (ibang puwede gawin). I have all the support form my management and family. But of course iba talaga pag mahal na mahal mo yung ginagawa mo and I would say singing, performing and entertaining people is my first love talaga so kung mawala pa yun, bakit pa di ba?” he added.
Iconic the album is produced by Jed Madela and Jonathan Manalo and is now available at record bars nationwide for only P350. Digital tracks can also be downloaded from iTunes, MyMusicStore.com.ph, Amazon, StarMusic.ph and Spotify.
Celebrity