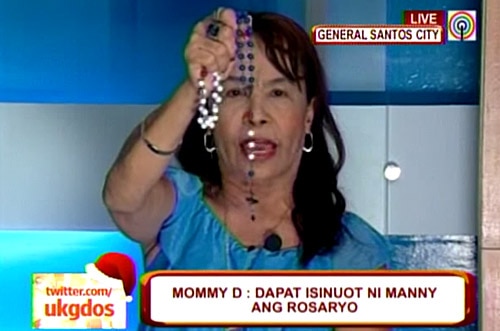 Known as the “Pacmom,” Dionisia Pacquiao, or Mommy D for short, is the mother of eight-division world boxing champion, Manny Pacquiao. Because of Mommy D’s unrelenting support for his famous son, she, too, has drawn great attention from the crowd. Hence, PUSH listed down reasons why Mommy D is just as talked-about as her son Manny.
Screenshot from YouTube
1. Mommy D is vocally honest
Mommy D is not afraid to speak her mind. This is evident in her interviews, especially when asked about Manny’s change of religion, career retirement and boxing opponents. Screenshot from YouTube
2. Mommy D is open about her love life
Speaking of being honest and vocal, Mommy D also didn’t shy away from sharing her love life to the public.
At 65 years old, Mommy D proved that love transcends age as she is in a relationship with a 38-year-old seaman named, Michael Yamson. In past interviews, the couple talked about how they got together as well as their sex life.
Before Valentine’s Day this year, Mommy D even appealed to her boyfriend, who has prior engagements then, to celebrate their first anniversary with her. Her Gandang Gabi Vice guesting last year, Mommy D, who is more popular for being a ballroom dancer, trended online when she sang Miley Cyrus’ “Wrecking Ball.”
Lastly, Mommy D is also a commercial model, appearing in the TVCs of a known money remittance company, among others, and even making its tagline, “Walay Hasul” popular. Screenshot from YouTube
4. Mommy D is a favorite among impersonators
Because of her fun personality, Mommy Dionisia became a personal favorite of impersonators. Famous celebrities that impersonate her include Asia’s Nightingale Lani Misalucha, and Kapamilya comedy stars Pokwang and Melai Cantiveros. Photo by Jonathan Cellona; from ABS-CBNnews.com
5. People talk about her fashion
Be it her birthday dress or her gown during a public event, the media and the madlang people really talk about Mommy D’s fashion style. After all, her get-ups are as vibrant as her personality! As such, in a report by ABS-CBNnews.com, Mommy D placed 7th in their online poll of best dressed women during last year’s SONA.
Celebrity