Jeron Teng and Robi Domingo admit they want Jane Oineza and Gretchen Ho to be their special guests. 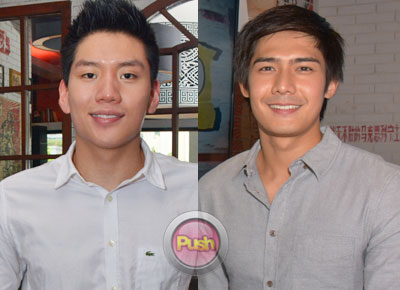 In a quest to define what really makes someone a modern man, Robi Domingo and Jeron Teng host their very first show together starting this month called Man Up. “To put it simply, Man Up is a show for men by men directed by a lady. We're going to explore different kinds of sub-cultures. It's not like your average sports show where we'll be tackling the rules, regulations, and kung paano linalaro yung sport. More than that, we're going to tackle the different aspects of that sport from fashion to the people plus yung food,” he shared during the Man Up press conference held last May 18 at the Komrad restaurant in Eastwood mall in Quezon City.
With Robi being a true blue Atenean and Jeron still playing for De La Salle University basketball team, the two admitted they like to play up the Eagles versus Archers rivalry onscreen. “I graduated in 2012 and in two years sabi ko yung Ateneo-La Salle rivalry it will go off after some years. Kasi siyempre pagka taga-Ateneo ka automatic when you see the color green iba yung nararamadaman mo eh, nagagalit ka (laughs). But because of this show parang bumabalik (laughs). Bumabalik yung certain spark na whenever I see Jeron I have to show my school what we're made of and it will show sa programang ito,” Robi shared.
The UAAP player said he is not going to lose to Robi when it comes to their challenges on Man Up. “For me and Robi, kasi it's really about going out of our comfort zones and trying out different things hindi lang sports. Kasi ako ever since it's been basketball all my life so ngayon lang ako sa show na ito nakaka-try ng different sports and siguro because of the show lumalabas yung pagka-makulit ko and dito rin lumalabas yung competitiveness ko as a basketball player,” Jeron added.
With the show airing its premiere episode starting this Sunday, May 24, 11:30 am on the ABS-CBN Sports + Action Channel 23, the two shared which of the episodes they've taped so far has been their favorite. “Yung dragonboat akala namin madali lang kasi sabay sabay lang kayo and you're going to use your arms pero after that episode parang gusto na namin umuwi (laughs). But for me, I would have to choose the boxing episode with Ellen Adarna as my favorite kasi kumpletos rekados yung episode na yun eh (laughs). Basta hindi ko ma-explain eh. Baka maiba yung write-up mapagalitan na naman ako ng nanay ko (laughs),” Robi joked.
According to Jeron, stepping out of his comfort zone which is the basketball court has been a refreshing change for him. “Before this show came my basic feeling was, 'Ano kaya kung mag-try ako ng ibang sport?' Kasi bago pa lang ako ipinanganak basketball na eh. So parang itong show na ito dito ako na-cha-challenge eh. Sobrang excited talaga ako per episode dahil nakaka-try ako ng mga bago. Enjoy talaga. But of course siyempre I can't miss any practices sa team so yung shooting schedule namin revolves around kung kelan ako free at walang practice. Yung team ko naman they'll be happy to support me, papanuorin nila ako sa TV so manunuod yung mga teammates ko for sure,” he said.
With his girlfriend Gretchen Ho being a sports personality, Robi said it was not hard to invite her to guest on Man Up. “Naka-schedule na yung episode with Gretchen and another volleyball superstar. I think we will showcase the sport na talagang nasa elemento nila. In my case si Gretchen for volleyball because these days nagtuturo din siya ng volleyball eh. Gusto namin i-explore bakit gusto niya yung sport na yun and then yung mga sub-cultures behind volleyball. At kung gaano kahirap maging coach ngayon,” he explained.
Fans who have been following Jeron's ongoing courtship of Nasaan Ka Ng Kailangan Kita actress Jane Oineza would also be interested to know that Jeron would love to have her guest on his first show even if she does not do any sports. “Ang Man Up naman hindi lang sa sports lang. Feeling ko kasi with Jane siguro food trip. Siguro maraming curious kung ang mga artista, ano ba yung mga kinakain nila, mga daily things. Sa sports kasi ewan ko kung athletic siya (laughs),” he added.
With his background in hosting shows like Pinoy Big Brother, The Voice of the Philippines, and The Biggest Loser, Robi said Man Up is a change to his usual style of being on camera. “So far tuwang tuwa ako sa lahat ng mga challenges na binibigay sa amin. Because for the longest time you see me on TV or events with a suit on tapos nakaayos ang buhok. Kasi kung di niyo naitatanong bata pa lang ako I've been into sports and I may not be a pro in one sport pero yung dad ko tinuruan niya ako sa different types of sports. Tennis, swimming, badminton, basketball, soccer and lots more. I feel that being a jack of all trades has helped me a lot in this industry especially sa sports documentary shows. Whatever na dumating sa harapan namin, you have to man up man,” he shared.
Man Up is directed by Krizzie Syfu and produced by Erik Matti, Charlie Dy, and Dondon Monteverde under Virtual Playground Co. Catch it every Sunday, 11:30 am on ABS-CBN Sports + Acton Channel 23 starting on May 24, 2015.
Celebrity