Things to watch out for in ‘Para sa Hopeless Romantic’ 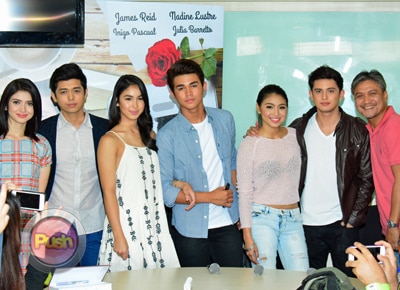 Star Cinema and Viva Films’ Para Sa Hopeless Romantic premiered on the big screen May 12 at the SM Megamall. The event was well-attended by the cast—including James Reid, Nadine Lustre, Julia Barretto, and Inigo Pascual, crew, friends, and fans.
Para sa Hopeless Romantic is based on the novel written by Marcelo Santos III, who has a cameo in the movie and was present during the premiere night as well.
The story revolves around four major characters, namely Rebecca (played by Nadine) and Nikko (played by James) from the “real” world and Ryan (played by Inigo) and Maria (played by Julia) from the story that Rebecca is writing about. The main themes were about moving on and giving a failed romance a second chance.
The film consisted of various transitions. Aside from the constant transition from the reality to the story that Rebecca was writing, there were also flashbacks in the lives of the two couples. The story was presented in an organized manner which made it easy to understand.
The actors and actresses also progressed in terms of their acting prowess.
From their usual kilig and happy-go-lucky roles, Nadine played a bitter and melancholic character while James’s role involved not being able to move on from a former love. Nadine said in an interview with some of the press at the premiere night’s after-party, that the movie is a new concept for them given its dramatic scenes. “This time kasi it’s not just pagpapatawa and kilig. This time, there’s drama so it’s new for us, me and James,” she said.
Julia carried her role well as a friendly, bubbly, low-maintenance girl while Inigo was a quietly reserved boy who does not believe in love yet fell into it. When the press got to talk to her in the after-party, Julia said that her favorite part of her character was Maria’s hair-flipping moment as she made an entrance into a classroom where she first met Ryan. “My hair flip. It’s going to be the most talked-about scene of Maria. I’m excited,” she said. Something to watch out for.
Another big surprise in the movie was Shy Carlos’s portrayal of Jackie, Rebecca’s loyal and jolly best friend. If there is one person in the movie who is the actual epitome of a hopeless romantic, it should be her.
Here are five things you should watch out for in Para sa Hopeless Romantic:
1. Maria’s hair-flipping moment
2. Shy Carlos’s portrayal of Jackie
3. The “chair-chatting” scenes of Rebecca and Nikko
4. What happens to Ryan
5. The ending, of course.
Para sa Hopeless Romantic is now being shown at cinemas nationwide.
Celebrity