Janella Salvador says she is happy about Liza Soberano’s success

Janella Salvador stresses that there is no competition between her and Liza Soberano. 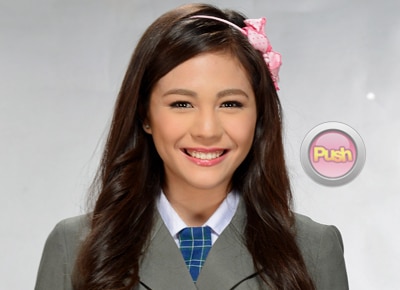 Janella Salvador is happy about the success of her soap Oh My G! The young star relayed that she did not expect that the ratings would skyrocket. “I’m actually super happy and I didn’t expect the ratings kasi akala ko steady na kami don sa mark ng 15, 16. Nong nag-break lahat ng students, tumaas lahat ng rating niya,” she stated.
The young star shared that it is such a joy to be working with her co-stars Manolo Pedrosa and Marlo Mortel. “I’m happy naman to work with both of them. They are both fun to work with.” With her hectic schedule, Janella chooses to stay at home whenever she has free time. “When I have a break, I [would] rather spend it at home.”
While Janella still loves singing, she has learned to love acting as well. “I like both na pero inborn talaga singing and I just learned that I love acting recently,” she said. On her dream acting projects, Janella said that she wants to work on different genres of projects. “I want to try all sorts of genre of acting,” she stated.
The young star also commented on the comparison between her and Liza Soberano who is also currently starring in her own TV series Forevermore. “Wala, there’s no competition and we are super friends and I believe that we are different people.” Janella remarked that she is happy about Liza’s success since she has witnessed how the latter has worked hard for her career. “I was super happy for her kasi before sa batch she works so hard and she tried for so many roles na and now it's her time na talaga and I’m so happy for her and everyone loves her now,” she said.
Janella also extended her gratitude to those who support Oh My G! “Thank you everyone for really supporting the show and making us one of the most watched on iwanTV kasi ‘yung iba before pag may school hindi nakakapanood so sa iwantTV pinapanood so now vacation na, tumaas ‘yung ratings namin so thank you. Thank you very much for watching.”