The comedienne reveals she had a heart-to-heart talk with Lee after their premiere night. 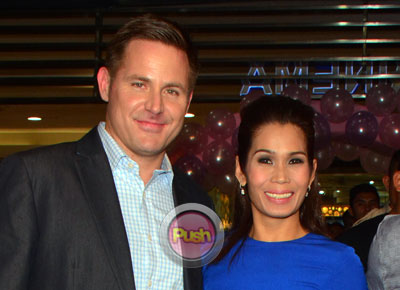 On Kris TV’s episode today, Pokwang narrated how her relationship with Edsa Woolworth co-star, Lee O’ Brian began.
Pokwang said that Lee already told her that he likes her since their first day of shooting the movie. However, Pokwang said that Lee did not want their work to get affected by what is going on between them, so during their last shooting day when Pokwang had to return to the country, Lee expressed his desire to go to the Philippines to promote the film. “Yun ba talaga reason o alam mo na (gusto mo ko makita),” she even teased Lee.
After a few days, they met again when Lee visited her in San Diego, where she had a show. She said Lee would still hope to come to the Philippines until their director finally confirmed that Lee and another co-star, Steven Spohn will come to the country for the movie’s promotion. “Tuwang-tuwa siya. Sobrang na-excite siya. Bonggang-bonggang tuwang-tuwa siya,” Pokwang said.
So when Lee and the rest of Team Woolworth arrived in Manila, Pokwang shared she hosted a dinner for them and saw how happy Lee was. After their movie’s premiere night, he and Pokwang had a heart-to-heart talk, which she initiated in order to clear things between them. “Mahirap baka mamaya, ‘di ba… hirap nung parang… ako lang yung in love tapos… Dun ko nalaman. Sinabi niya, ano ka ba, first shooting day palang, meron na siyang kiyeme (feelings for her),” she revealed. “(Sabi ko) Ano tayo? Tapos hinalikan niya ko. Sabi niya gusto niya ko. ‘Yun lang. Masaya siya pag nakikita niya ko, pag magkasama kami,” she further narrated. She said that Lee will visit the Philippines again in April for about two weeks.
How did she tell her daughter, Mae about this? “Actually nahirapan ako kay bagets ah… ‘Yun pala, nakakaramdam na siya. Hinihintay niya lang magsabi ako pero okay naman sa kanya. Sabi niya, ‘o wag ka lang shunga. Alam mo na yan… Gusto ko makita kang happy ka,’ eh nakikita naman niyang masaya ako so… Tapos sabi ko sa kanya, ‘wag kang mag-alala, hindi ko pababayaan tuition mo, tapos tumawa siya ng malakas,” she happily shared.
Pokwang said that she is praying that Lee is ‘The One.’ Further, she revealed that if ever this turns out to be a long-term relationship and after Mae finishes her studies, she might consider residing in America, living a simple life as it is also her daughter’s dream to work abroad.
After recalling the dates, Pokwang said that their “monthsary” is every 20th as they got together last January 20.
Celebrity