Kean Cipriano and Sam Concepcion open up about the ladies in their lives. 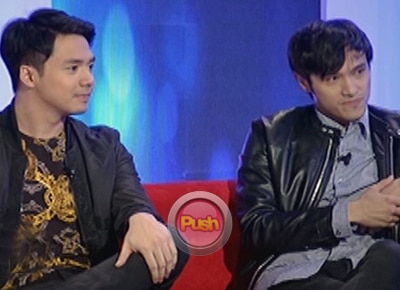 On Tonight with Boy Abunda, two of Your Face Sounds Familiar Grand Finalists Kean Cipriano and Sam Concepcion responded to critics saying that they don’t deserve to be included in this season’s Top Five.
Kean replied, “Well, ako naman kasi, since day one sa career ko, parang ang kalaban ko talaga sarili ko kung nabibigay ko yung hundred percent ko - may sarili akong mundo. Masaya ako na ginagawa ko yung gusto ko palagi. So kung meron man nagba-bash or critic or whatever and it’s a free world - pwede nilang sabihin yung gusto nila. Sa twitter nga nagte-tweet ako, tapos may nagte-tweet na ‘ay, hindi maganda performance ni kean cipriano.’ I-reretweet kita kasi sinabi niyo sa akin, ginawa niyo akong portal ng testimonials niyo so parang, okay, let’s do it. Kumbaga tine-take ko siya positively.”
One of the judges of the reality game show, Gary Valenciano, had previously named Sam as his heir apparent. This prompted some to say that it was because of him being a favorite that Sam made it to the Grand Finals.
Sam countered, “It’s funny you say that kasi actually, sa kanilang tatlo, sa judges, for me, Sir Gary is the hardest to please. Parang if I get great scores kina Sharon (Cuneta) and Jed (Madela), I have okay scores with Sir Gary, because I think in that way, mas napu-push niya kasi ako to do better. Pero of course I couldn’t say that he plays favorites cause he’s very fair.”
Straight-up, the host then asked Sam, “diretsong tanong, nagkabalikan na ba kayo ni Jasmine Curtis?” To this, Sam replied, “no no no no.”
The host then followed, “pero hindi naman kayo napipikon? Because I know I’ve read a post of Jasmine saying that ‘why is it in this country, people don’t seem to understand that exes can actually hang out?’”
“Yeah, and I really believe in that, too.”
When asked if he was trying to pursue Jasmine again, Sam shared, “well, I’m not going to rush anything. Nothing great comes out of anything that is rushed. I’m okay with having her around and being her friend.”
The host then prompted, “having said that Sam, last night of the world, liligawan mo ba si Jasmine?”
“Of course,” Sam answered.
Kean’s girlfriend, Chynna Ortaleza, recently celebrated her birthday. On whether or not a proposal occurred, Kean said, “wala namang nangyaring proposal sa birthday niya kahapon. It was peaceful, she’s beautiful, that’s all I can say.”
Celebrity