Dingdong Avanzado’s daughter Jayda is opening act for The Vamps

Dingdong Avanzado says he wants to focus on his family more after his term ends next year. 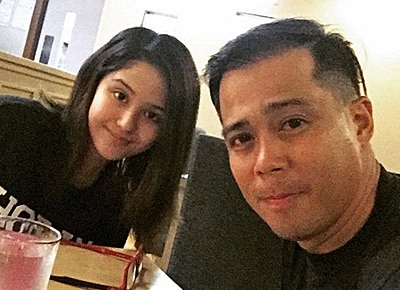 With the younger generation looking up to music idols like Ariana Grande and Miley Cyrus, Dingdong hopes his daughter will strive for originality. "Basta ang importante sa akin age appropriate at pangalawa I keep telling Jayda that her originality is important. Kasi siyempre pag bata ka your very impressionable so yung influences mo diyan mo pa lang na-de-develop yan eh. But as you get older, when you find your identity, you have to showcase something that's original. While it's good that you can be inspired by Ariana Grande. She is and a lot of people have been telling her na she does somewhat look like Ariana. Pero even siya alam niya, kapag naririnig niya si Ariana she does things na tini-tweak niya para hindi nangagaya lang siya kay Ariana. The important thing for her is that alam niya yung concept of being original di ba? Kasi dun ka mag-sa-stand out. Kung gagaya ka lang, you'll probably reach a certain level of success but you have to be original like her mom. Basta what's important is something that will represent her and her generation at saka importante she's having fun while she's doing it. Nakakatuwa lang pag ino-observe mo siya and the way she communicates for her age nakikita mo talaga yung creativity nung bata nandun eh,” he shared.
The singer-turned-politician says they don’t want their daughter to grow up too fast. "Si Miley Cyrus naman ngayon lang siya naging ganyan pero when she started noon wholesome si Miley. Yun nga kasi you’re dominated by the Arianas of the world now but honestly how old is Ariana? She's 22, 23, something like that and Jayda is only 12. So I told her, 'It's nice to hear you sing Ariana but remember your only 12 years old.' It's cute to see her kasi a 12 year old and she's singing like that. It's good but when your going to come out with your own music already, you have to fit ano yung age mo,” he admitted.
Apart from her mom’s concert, Dingdong said Jayda is already excited about being chosen as the opening act for the US boy band The Vamps who are arriving end of January. “Preparing for The Vamps gig, involved siya sa kung paano areglo nung kanta, kung papaano yung labas niya, ganun siya ka-metikoloso. She knows what she wants and what to choose from. She asks us pero alam niya ang gusto niya. She can sing. She can dance. She can play the guitar and the piano,” he said.
With both her parents being OPM artists, Dingdong said their daughter is aware of the expectations the industry might have from her. "Alam niya yung pressure involved eh kasi bata pa lang siya nakita niya yun eh. Sa states pa lang when we were going on tour, going around, taking pictures, ganyan. Alam niya yun. At saka alam din niya yung expectations na attached to that,” he said.
Watch I Am Me the major solo concert of Jessa Zaragoza on January 15, 2016, 8:30 pm at the Music Museum in Greenhills, San Juan. Special appearance by Jayda Avanzado as well as other surprise guests. Musical direction by Elmer Blancaflor with concept and direction by Dingdong Avanzado. Produced by Phenomenal Entertainment.
Celebrity