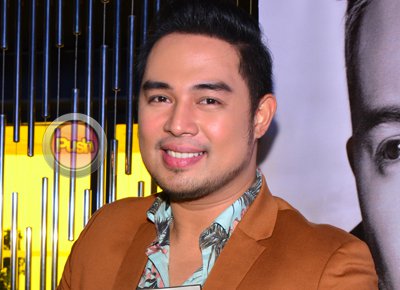 Before the busy holiday season starts, Jed Madela shared how happy he was to be the featured performer during the annual grand launch of the Christmas Musical Light Show at the River Park in Alabang. "Sobrang happy ako na may ganito tayo dito ngayon. We always go out of town para makita yung mga ganito and now it's here at the River Park yung Christmas lights show and it's open for everybody and I'm very happy ako yung napili nila to open it," he shared during the event held last December 1 at The River Park along Festival Mall in Filinvest, Alabang.
When the all-Filipina girl group 4th Impact got eliminated from X Factor UK last weekend, Jed shared how he felt for the ladies whom he knows personally. "Actually when I found out na na-eliminate sila I felt sad for the girls kasi they worked really hard. Kilala ko ang 4th Impact, ang Cercado sisters since nag-WCOPA (World Championships of Performing Arts) pa sila. I know all of them. Lima yan sila pero apat lang nag-compete. So when I found out na-eliminate sila nalungkot ako but at the same time you know what I feel so proud of these four girls na sila ang kumbaga role model ng mga artists who never stop," he admitted.
Jed said the "never say die" attitude of the four sisters is something a lot of aspiring performers should be inspired by. "Kasi may iba diyan na pag natatalo lang ayaw na or hindi lang sumikat ayaw na. Hetong apat na ito they really pushed themselves, they never gave up. They have the talent at alam nila na hindi nila mapapahiya ang Pinoy pag perform in a foreign stage. Kaya ako ang message ko lang sa apat to just keep on doing what they do best and that's singing and performing. I'm always here to support them in any way that I can lalo na sa iba pang gustong mag-compete," he added.
The Your Face Sounds Familiar juror also admitted that he did not agree with one of the comments X Factor UK judge Rita Ora said about artists having to be saleable on iTunes. "Yes napanuod ko. That's sad. That's very sad. Kasi personally I experienced that. Kaming mga artists we experienced that. I'm not naming names but it's a different time now. It's not just talent. Ngayon it's more of packaging. It's more of timing. It's more of how the manager or the team behind that artist would push the artist. Yun na ngayon eh. And of course the attitude of the artist. So it's a different era ngayon kaya nakakalungkot they base it more on how they sell than the talent. Sana ibalik natin yung tatlong essence ng contests na whoever has the talent, whoever has the 'It' factor, yung total package dapat hindi lang porke't sikat," he said.
During the Festival Mall event, Jed reiterated his belief that 4th Impact will definitely go far in the music industry even if they garnered the lowest votes which led to their elimination from X Factor UK. "I disagree kasi sobrang galing ng apat. I'm not saying that because I'm Pinoy but ang galing ng apat. I saw their performance. It was close to perfection and you know I guess right timing lang ulit. These four girls will really come back and you know if not in a competition probably on another international stage. So aabangan natin itong 4th Impact kasi babalik itong apat na 'to," he shared.
The River Park at Festivall Mall in Filinvest, Alabang also features different performances every Saturday with their Christmas Musical Lights Show happening from 6 pm to 9 pm daily until December 30. Live performance schedule is as follows: Darren Espanto (December 5), Up Dharma Down (December 12), Jason Dy (December 19) and Nyoy Volante (26).
Celebrity