Jessa Zaragoza admits she and Dingdong Avanzado are preparing for baby no. 2. 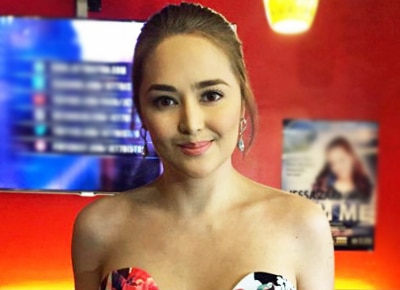 After a 13-year hiatus from the concert scene, Jessa Zaragoza is making her much-awaited comeback onstage with a one-night only solo concert dubbed I Am Me. The Phenomenal Diva admitted she was just waiting for the perfect time to get back into the music scene. "I always thought that if I had to do a solo concert again, I would do it at a time when I'm most ready for it. My heart, body, and soul should be one. I want to be fully prepared," she shared during her I Am Me concert presscon held last December 2 at the Jet 7 Bistro in Timog Avenue.
The concert is also a birthday celebration of sorts for the January celebrant, which is why she has been too busy to make plans for the holidays. "Naku dito lang kasi sobrang busy namin. Maraming mga gagawin so may mga rehearsals pa tapos may mga Christmas shows. In this concert aside from my hit songs, I'll be singing songs that have influenced and molded me into the artist I am today," she said.
Another thing Jessa is happy about lately is the fact that her husband Dingdong Avanzado (who is also her concert director for I Am Me) has no plans to run for re-election as Vice-Governor of Siquijor next year. "Hindi na siya mag-ru-run yehey (laughs). Ma-so-solo ko na yung asawa ko. Kasi siyempre alam mo naman ang politics mas complicated di ba? Tatapusin niya yung term pero tingnan natin kung hindi siya tatakbo hanggang December ha. Sobrang bihira (ako sa Siquijor) kasi nga medyo kumbaga hirap din pumunta ng Siquijor dahil mag-plane tapos mag-bo-boat pa. Pero si Dingdong every week andun," she explained.
Jessa admitted Dingdong wanted her to consider running for a position, but she knows her heart is not into politics. "Hindi ko kayang problemahin ang problema ng iba (laughs). Parang iba siguro yung passion na hinahanap," she added.
Another big reason why her husband has decided not to run again is because the couple want to have another baby. With their only daughter Jayda now 12 years old and giving a special performance in the I Am Me concert, Jessa said it is about time for baby number two. "Gusto ko. Pero siyempre pinaplano lahat ng bagay (laughs). Kasi noon sabi ko kung kunyari buntis ako tapos lagi siyang alis ng alis parang ang hirap naman yata yun tapos ako lang mag-aalaga sa isa pa naming anak. parang mahirap ata yun. Yun yung mga things na sabi ko nga dapat pinagpa-planuhan at sineseryoso talaga natin kasi serious matter yun eh," she said.
Jessa Zaragoza's I Am Me solo concert will be held on January 15 at 8:30 pm at the Music Museum in Greenhills, San Juan. Special appearance by Jayda Avanzado as well as other surprise guests. Musical direction by Elmer Buenaflor with concept and direction by Dingdong Avanzado. Produced by Phenomenal Entertainment.
Celebrity