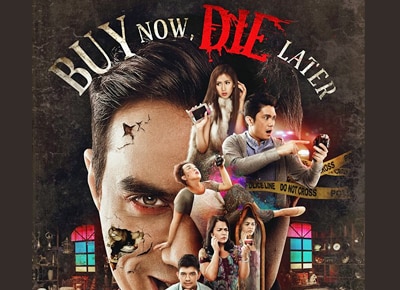 The Metro Manila Film Fest entry Buy Now, Die Later is not a hardcore horror film. But, rather, it was dubbed as a “psychological horror-comedy” flick directed by MMFF first-timer Randolph Longjas.
While many might dismiss the film because of it being a “cross-genre,” the fact that the film didn’t really focus on just scaring people and making them scream is practically it’s greatest strength.
Divided into five stories, the film is a collection of five stories about five individuals.
There’s Odie, played by Vhong Navarro, a struggling blogger who wants to be known as an acclaimed photojournalist. There’s Chloe, played by Alex Gonzaga, a plain Jane who’s aspiring to break into the showbiz scene. Then, there’s Ato, played by Rayver Cruz, an embattled restaurateur who hopes to drive more patrons to his business.
Next there’s Pippa, played by John Lapus, a fun-loving gay persona who’s looking for love and affection. Lastly, there’s Maita, played by Lotlot de Leon, Chloe’s ambitious mother who lost her adolescent years when she became a teenage mom.
Then there’s Santi, the villain antique shop owner played by TJ Trinidad.
What makes Buy Now different from the rest of the past comedy-horrors is its brave attempt to weave in the five senses into each of the character’s stories. While it may seem farfetched at first, Randolph and screenwriter Ronald Allan Habon were able to seamlessly incorporate them without looking forced or half-baked.
Even the stories of the cast were consistently and logically tied together, which is where most films made up of small stories, almost always fail. Odie was Ato’s friend who was a frequent diner at his restaurant. Ato has known Chloe due to her popularity. Pippa was Chloe’s fan together with his, sister Larra played by Cai Cortez. While Maita is Chloe’s mother who was formerly photographed by Odie’s late photographer father during her teenage years.
Sure there were a bit of loose ends like Santi’s back story, but the film itself more than made up for the all the life lessons that it stressed all throughout which mainly stems from being consumed by utter greed, ambition and discontent.
Vhong’s segment came in as the “scrariest” followed by Alex’s, Rayver’s and Lotlot’s. John’s segment, albeit the one that clocked in as second most family-centered next to Lotlot’s and Alex’s, filled up the comedy aspect of the film.
Overall, the film could be considered a success especially on the story and effects aspect that it merits a chance to be seen if one is looking for a “lighter” kind of horror this coming holidays.
Celebrity