EXCLUSIVE: Aiza Seguerra’s secret to a happy marriage: ‘She respects me as her husband’

The talented artist shares how she deals with parenting, married life and Liza Dino’s onscreen nudity. 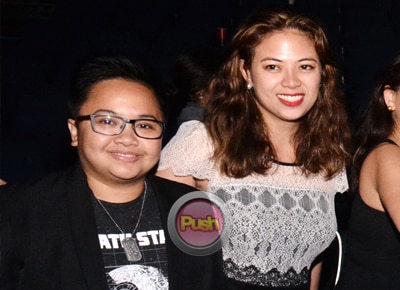 At the gala premiere of the MMFF New Wave film entry Toto, Aiza Seguerra showed all out support for wife Liza Dino, who is part of the comedy film. The multi-awarded singer was even seen taking photos of the cast and acting as photographer for Liza’s big night.
In the film, Liza plays a liberated woman who has some steamy scenes with lead actor Sid Lucero. Aiza shares how she took the news when Liza first got offered the role.
"Siyempre as courtesy alam din naman niya na o-oo din naman ako. I appreciate her telling me before she accepted the role. Natuwa naman ako kasi (the sex scene) was tastefully done. Ang ganda ng pagkakagawa talaga and it was so fun how it came out. Sobrang nakakatuwa siyang panuorin. Of course I’m proud (laughs). Sorry but I’m very proud,” she shared during the Toto premiere held last December 17 at the Glorietta cinema in Makati City.
Being good friends with Sid Lucero also helped Aiza be comfortable with Liza’s intimate scene with included baring some skin.
"I didn’t have to talk to Sid. He knows already and natuwa rin ako how he took care of my wife during the whole scene so nakakatuwa rin and I’m happy that it’s him,” she revealed.
If Liza gets offered to do more sexy roles in the future, Aiza said she will not be the one to pick when it comes to career decisions.
"It’s up to her. She’s always the last say. Alam mo naman it’s her body so she decides. Kumbaga more than anything I’m just happy that she respects me as her husband na she asks my opinion about it. Pero she’s an actress so she knows what is going to be good for her, kung ano yung magandang role and everything so I don’t want to stop her from doing the things that she wants to do just because she has to bear her body. She’s comfortable naman with it so why shouldn’t I be comfortable?” Aiza explained.
Meanwhile, Aiza shared her relationship with Liza’s seven-year-old daughter Amara is going smoothly.  She even admitted that she is the disciplinarian in the family.
"Si Liza yung good cop, ako yung bad (laughs).  I’m very strict. I’m like my mom sa pagpapalaki. Siya kasi yung disciplinarian eh so feeling ko nagagaya ko siya,” she shares. This Christmas, their family plans to have a simple celebration at home. "This is actually our second Christmas together because we got married December 8 last year. Wala munang surprise ngayon kasi nagpapagawa kami ng bahay. Well siguro this is the first time we’re spending Christmas sa bago naming house,” she said.
Aiza also mentioned what she is going to be preparing for next year for her loyal supporters here and abroad.
"I think I have a U.S tour come February, sa U.S and Canada yata yun. Kalalabas lang nung May nung newest album ko under Universal records so we’re still promoting the album,” she stated.
Celebrity