PUSH.com.ph lists down Six celebrities who deserve to take the lead in showbiz. 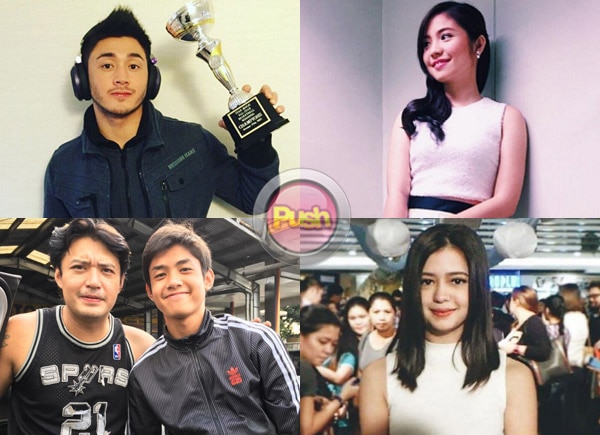 Talented, charming, and versatile are the key words to describe these celebrities who should take on lead roles.
1. Sofia Andres


17-year-old Sofia Andres’ first lead role was when she starred in the 2014 film entitled, Relaks, It’s Just Pag-ibig opposite young actor Inigo Pascual.
This break was then followed by more acting opportunities like becoming Teen King Daniel Padilla’s character’s love interest in the movie, She’s Dating The Gangster.
Her biggest showbiz break on national TV, however, was when she became a third wheel to Enrique Gil and Liza Soberano’s love team in the defunct top-rating primetime series, Forevermore.
Even at her young age, Sofia has already received several recognitions from award-giving bodies such as FAMAS and PMPC.
2. Grae Fernandez


Sue Ramirez is making waves online now that she has entered the second book of the 2015 Pangako Sa ‘Yo remake. She plays the role of Ligaya who will get close to Angelo, played by Daniel Padilla.
But before Sue gained popularity for her role in the top-rating drama series, she also showed her acting prowess in teleseryes like Nasaan Ka Nang Kailangan Kita and All of Me.
4. Diego Loyzaga


Known for playing third wheel roles, Diego Loyzaga is currently a supporting character in the top-rating drama series Pangako Sa ‘Yo where he plays the role of Kathryn Bernardo’s character Yna’s best friend.
But before joining Pangako Sa ‘Yo, he was first a third party to the on-screen team up of Liza Soberano and Enrique Gil in the defunct primetime drama series, Forevermore.
Aside from his acting gig, Diego is also a host/VJ of the Filipino music channel, MYX.
5. Sharlene San Pedro


From being a Goin’ Bulilit (Website link: ) to a mainstay of the teen-oriented show, Luv U, Sharlene San Pedro has proven her acting prowess in the projects she did throughout the years.
One of her remarkable roles was when she played the character of Hannah in the former primetime TV series, Nathaniel.
6. Arron Villaflor

Currently playing a third wheel to the on-screen partnership of Yen Santos and Albert Martinez in the afternoon drama, All Of Me (Website link: ), Arron also starred in the successful Heneral Luna movie that will represent the country in the 2016 Oscars.