Janella Salvador on being chosen to sing HK Disneyland's theme song: ‘I can't believe it was me’

Janella believes that all the blessings she's getting are from “G.” 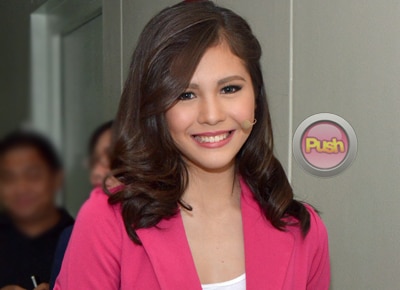 Blessings are continuously pouring for OPM Pop Sweetheart Janella Salvador as she was tapped to be the Philippine representative to sing Hong Kong Disneyland's 10th anniversary song.
Coinciding with the launch of her self-titled debut album, Janella, during a recent press conference, also showed the official music video of "Happily Ever After" which she shot in Hong Kong Disneyland. The music video which will be launched on MYX! on December 5, according to Janella, had her touring Hong Kong Disneyland.
"I can't believe I was chosen, I can't believe it was me. It's just so magical and parang bumalik sakin 'yung feeling ko na parang bata ako ulit," blurted Janella about being chosen.
Even her mom, Jenine Desiderio was shocked when news of the project was relayed to them.
"We're in a meeting tapos suddenly they told me 'Oh Janella was chosen ah, she's going to sing the theme song of the 10th anniversary of Hong Kong Disneyland.' 'Yung Mom ko pa, kasama ko pa siya nu'n, natawa ako kasi naiyak pa talaga 'yung Mom ko," she said.
An ABS-CBN representative clarified that although this wasn't the first time that a Filipina was tapped by Hong Kong Disneyland to perform one of their pieces, they were actually the ones who chose Janella to be the Philippine representative to sing "Happily Ever After" after she was pitched to them.
To this day, Janella remains in awe that a lot of blessings are coming her way after being part of the soap Oh My G! She even joked that the opportunities are from "G" or from God.
"Minsan hindi ko ma-absorb na i've achieved this already 'yung may album. Sa totoo lang hindi ko alam kung ano ang nagawa ko para ma-deserve ito. All I do is ine-enjoy ko lang lahat and it's such an honor to be called the OPM Pop Sweetheart dahil hindi lahat ay nabibigyan ng title tapos nabigyan ako no'n. It's different and overwhelming," she said.
This year Janella had a teleserye, an album and her first-ever big screen project Haunted Mansion which will be part of the upcoming Metro Manila Film Festival.
Apart from that, the song will also be part of her limited edition album which will be out in the market this December.
Celebrity