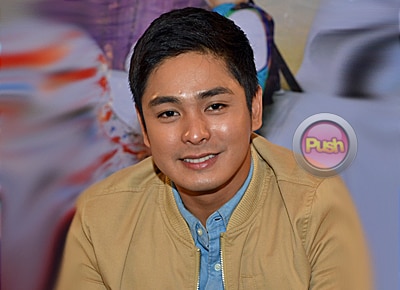 While Primetime Action King Coco Martin continues to deny about the existence of a special person in his life, his best friend Vice Ganda is more than willing to talk about it.
During the recently-concluded press conference of their upcoming Metro Manila Film Festival entry Beauty and the Bestie, Coco gamely dished things about Vice’s love life.
But when the tables were turned, Vice took the upper hand and quickly responded when asked by the press if his “bestie” has a girlfriend as of the moment.
“Ayoko na lang magsalita kasi ayaw ko naman manggaling sakin na oo,” he said with a huge laugh.
The Ang Probinsyano star meanwhile countered what Vice revealed and said, “Wala pa po. Baby pa eh. Hanggang next year.”
When asked if the name of his so-called girlfriend’s name starts with the letter “J,” Coco became evasive.
“J as in jowa,” he joked.
Despite repeated denials, Coco has been endlessly linked to her former Walang Hanggan co-star Julia Montes.
While they used to be very open with one another about their respective romances, Vice shared that they have now ended up keeping it from one another.
According to Vice, the said situation started after he noticed that his best friend tends to be too brutally critical on his boyfriends.
“Dati alam namin eh ngayon kanya kanya na kaming kublihan. Kinukubli ko na sa kanya tapos siya nagkukubli na rin,” said Vice.
Does it mean that he also grills Coco’s girlfriends?
“Hindi. Eh siyempre babae ‘yun ano!” said Vice.
What many do not know, according to Vice, is that Coco is actually much critical than him.
“Sa totoong buhay mas okrayera siya sa akin. Mas malala. Mas masungit siya sa akin. Mas strikto siya sa akin. Ako playtime lang. ‘Yung jowa niya ookrayin ko sa kanya pero hindi ko sasabihin ‘yung mismong jowa,” Vice clarified.
Coco and Vice will be seen together on their first MMFF entry Beauty and the Bestie which will be out in cinemas starting December 25.
Celebrity