Sam Milby admits Anne Curtis was a big part of his 10 years in the business. 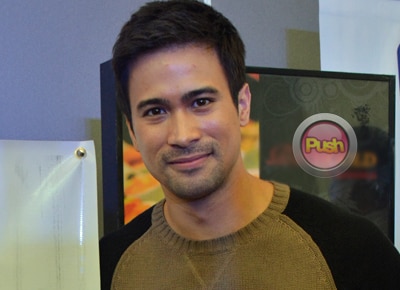 Fans rooting for a SamAnne reunion got their wish granted once again, albeit briefly, as ex-lovers Sam Milby and Anne Curtis shared the stage for a number in the former’s concert titled The Milby Way.
The former couple’s performance for Sam’s 10th anniversary concert on Saturday at the KIA Theater garnered the loudest screams from the audience. In fact, the two were even egged on to kiss after their duet.
Prior to performing, Sam shared that it was actually the It’s Showtime host who chose their song because “feeling niya [Anne] kaboses nya daw ang kumanta nito.” The two performed a mashup of Adele’s latest hit “Hello” together with the Lionel Ritchie classic hit of the same title.
Somehow, the Rockoustic Heartthrob admitted that he expected to be ribbed by the audience after singing the song.
“I expected it. It's a song about ex-lovers, so nakakatawa rin ‘yung lyrics,” he said.
Adding that, “Madaming nagsasabi, 'O, bagay sa inyong dalawa.' I expected it naman.”
The Doble Kara star didn’t mask his gratitude for Anne, saying that, “I'm just very thankful that we've been able to maintain the friendship. Siyempre, we won't keep in touch, but she agreed to be part of this also.”
The couple were together for four years, almost half of the length of time that Sam has been in the showbiz industry.
“Siyempre she was a big, big part of my ten years [in the business]. She's a big, big part of my life also,” he admitted. “Siyempre, you know, it wouldn't be complete if she weren't there.”
Sam and Anne have worked together a few times after their breakup. Just last year, the two starred on the film The Gifted which was directed by Chris Martinez. Prior to that, the two have worked on the teleserye Dyesebel.
Apart from having a good friendship with Anne, Sam’s budding closeness with a new girl seems to be flourishing as well.
While Sam had been especially mum as to whom he was seeing, previous reports named the woman to be Etcetera co-host Mari Jasmine.
MJ, as her friends used to call her, is of Japanese and English descent who grew up in Australia. She’s jumped from numerous countries to pursue her modeling career and has landed in international magazines like Vogue, Marie Claire, and Elle, according to her blog.
After the concert and while Sam was granting photo ops and interviews to the press, model-host Mari Jasmine was spotted in one corner of his dressing room.
When prodded to spill things about his love life, Sam said, “Ayoko pa. It's too early.”
“The things that have been coming out, they're all assumptions, kasi walang galing sa akin. ’Yun nga, it's still early. I still don't want to talk about it. So I hope you understand,” he ended.
Prior to being linked to Mari Jasmine, Sam was rumored to be texting Maja Salvador, an issue which both of them confirmed to be true but only because just as friends.
Celebrity