After Presidential candidate Davao City mayor Rodrigo “Rody” Duterte made headlines regarding his speech where he complained about the traffic during the Papal visit in 2013 and said, “Gusto kong tawagan, ‘Pope putang ina ka, umuwi ka na. ‘Wag ka nang magbisita dito.”
Pinoys took to social media to share their opinions including musician Jim Paredes and Parokya ni Edgar vocalist Chito Miranda. Jim, in his Twitter account expressed his dismay over Mayor Duterte’s speech and also felt pity for those who were defending him. On the other hand, Chito said on his Facebook page that Mayor Duterte is ‘what our country needs.’

Hmmm.I value my faith more than anything, even my country.I love and respect the Pope a lot more than Duterte.Pero... 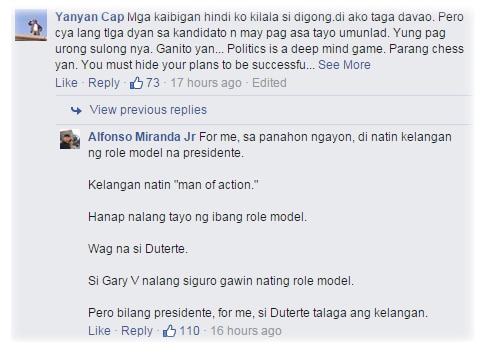