Mig Ayesa on meeting Tom Cruise: ‘I was looking at the eyes of Jerry Maguire or Maverick’ 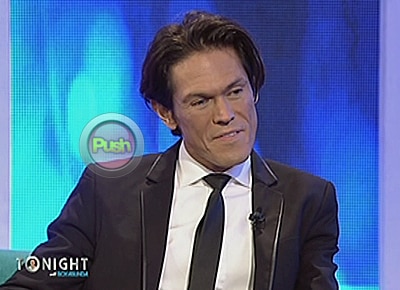 On Tonight with Boy Abunda, Mig Ayesa, star of the Philippine production of the Broadway Musical The Bridges of Madison County, shared his journey to fame.
Mig Ayesa’s popularity skyrocketed when he placed third in the reality show Rock star: INXS. The actor shared, “It changed my life completely. I was actually working doing ‘We Will Rock You,’ playing the lead of that, in London in West End. And I auditioned for the show because I’m a huge INXS fan, their being Sydney boys as I’m a Sydney boy. They were the soundtrack to my youth so I decided to go for the show. And because of my success in the show, I moved to the States, I had a recording deal, got a green card. It introduced me to a worldwide audience, and also, the very important thing about this is that it introduced me back to the Filipino audience. So I got to come back many times and do some concerts, do some gigs, and work here in the Philippines, and I’m very proud of doing that.”
Mig also starred as Stacee Jaxx in the musical Rock of Ages, through which he was able to meet Tom Cruise who was cast in the same role as Mig was in the film adaptation of the musical.
On meeting Tom Cruise, Mig shared, “It was the first day of his rehearsals for the movie. And the director, Adam Shankman, decided to take Tom to see the show, and see what I was doing with it. So he did come to see the show, we met backstage, he was very gracious. During the show where Stacee Jaxx walks through the audience and basically collapses over an audience member, I remember walking through the audience and I clocked Tom Cruise and Katie Holmes; they were seating right near the aisle. I basically fell on top of them. Most of the producers were shocked because they didn’t know what I was going to do. And as I was climbing Tom Cruise’s lap, it was like ‘Oh my God, we look the same, we’re the same’ – he loved it. Suddenly, I was looking at the eyes of Jerry Maguire or Maverick. It was crazy. I’m such a huge Tom Cruise fan. After the show, when I met him, I said, ‘Geez it was like into a mirror.’ He said, ‘I’m very excited to see you. I thought you were amazing. If I can do half the job as good as you in the show, then I’m doing well.’”
During the course of the interview, the actor was asked if he’s ever had to lip-sync during a performance. Although Mig understands that there are times wherein there is a need to lip sync, he replied, “I’ll be honest with you, I have never lip synced. I wish sometimes that I had, because there are some times when I had a sore throat, but I never have. I’m proud of that.”
“Have you ever fallen in love with a Filipina?” the host asked.
“Yes. I did have a girlfriend for six months who was Filipina, a Filipina-Australian. I did date a Filipina a couple of years ago. I think I possibly could’ve fallen in love with a Filipina today,” Mig admitted.
On second chances in love, the actor shared, “I have been through divorce, and it was probably the most traumatic experience in my life. (…) But I find myself now in a very, very new, very fresh relationship, and it’s allowing me to feel open again, and I’m feeling like it’s a beautiful thing. I feel like I’m actually letting myself go. And it’s this vulnerability, you let yourself open, you let people in. And that feeling is both very scary, and very exciting. I feel like I’m getting a second chance at life.”
Celebrity