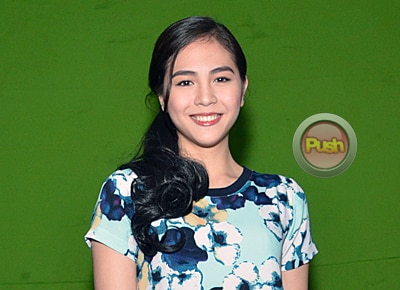 Upon learning that she will be working with new Kapamilya actor Elmo Magalona, Janella Salvador shared that she was actually excited about the fact that she would be teaming up with someone who is new in the network and who has a musical background.
“When I saw him, natuwa naman ako. I feel good that I get to work with someone fresh and hindi ko pa nakaka-work before and sobrang kaka-meet pa lang namin. And I’m excited nga sa music angle because both of our parents are musical people so I’m excited to talk about everything,” she said.
What is his first impression of the actor? “He’s like a very nice guy talaga, parang gentleman naman siya.” Does she find him cute? “Of course, he is naman,” she responded.
Janella shared that she has already an idea that Elmo acted and sang before she got to meet him. “I’ve heard of him na kaya niyang mag-sing, [na] gumagawa din siya ng soap and nagra-rap din siya.”
Janella and Elmo will star in the upcoming Kapamilya serye Born For You. Music will play a big part in the soap. According to actress, releasing an album inspired by the serye might possibly happen. “Yes because songs are really going to be a big part of this teleserye, ‘yung mga theme songs dito talagang aabangan.” Since it’s their first time to work together, how does she plan to break the ice? “I guess naman mabilis naman kaming maging close dahil sa music nga, siguro magsha-share kami ng music. I think we’re going to have bondings naman and I’m sure naman by January we are going to be close.”
The actress was the ka-love team of Marlo Mortel (MarNella) before she was introduced as the new screen partner of Elmo. When asked about her initial reaction upon learning that she will not be working with Marlo anymore, she relayed, “For a while lang naman ‘to and I’m happy naman to be trying something new, something fresh and even Marlo is happy for me naman so sana ‘yung mga fans maging happy. Siyempre hindi ko maiiwasan ‘yung reaction nila pero this is very fresh, I’m trying something new and we are all hoping that this is going to work. I actually met [Elmo] last week pa lang so parang wala pa kaming expectations, parang we’re all hoping and praying,” she said.
She added that she will still get in touch with Marlo even that they will be working on separate projects already. “Actually it doesn’t mean naman na may bago akong project, may bago siyang ginagawa hindi na kami magu-usap at all. Siyempre we’re still going to keep in touch and like I said happy naman kami with each other na may kanya-kanya kaming projects and ‘yun nga it’s like destiny, if ever we’re meant to be together in the future as a love team then why not? It’s destiny,” she stated.
Celebrity