Cristine Reyes admits to being a clingy girlfriend to Ali Khatibi 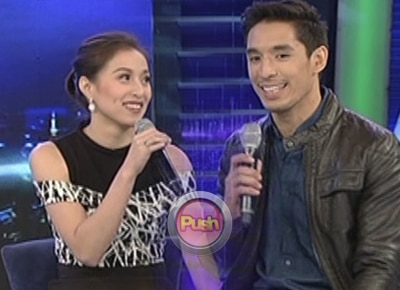 On Gandang Gabi Vice, engaged couple Cristine Reyes and Ali Khatibi recounted how their love story began.
According to the couple, they were introduced by Champ, their common friend and vocalist of Pinoy rock band Hale. Their first meeting was in 2005. Cristine said their meeting that time wasn’t memorable to her. In 2012, they bumped into each other again and this time Cristine had a chance to hang out with Champ and Ali. Cristine also promised to go to Ali’s gym to work out/train under him. Ali is a mixed martial arts fighter and is a purple belt athlete.
After two days, Ali was surprised when Cristine actually turned up at his gym. Cristine shared how she felt the first time Ali touched her while he was coaching her to do side crunches. “Nakaramdam ako ng kuryente, kinilig ako.”
For his part, Ali said he appreciated Cristine’s beauty when she was working out in the gym with him but it was while they were in Iloilo that he developed deeper feelings for her.
Cristine said they had a chance to hang out when the Kapamilya Sunday variety show ASAP went to Iloilo and Ali and Champ were also there for the Dinagyang Festival. The three decided to get together and Ali and Champ persuaded Cristine to rebook her flight.
After Iloilo, Cristine said there was a ten months lull when they didn't contact each other. Cristine revealed this was the time she tried to brush off her feelings for Ali as just a “fling or an infatuation.”
Cristine continued, “After ten months, ang hirap.” The actress revealed that they reconnected on March 8. “Tanda ko yun kasi pinuntahan ko siya sa Zambales.”
Vice Ganda commended how she didn’t let pride get in the way when she decided to go to Ali. “Buti hindi ka nagmaganda na ako si Cristine Reyes…?” Cristine matter of factly said, “Malungkot e, malungkot na hindi ko siya makausap, malungkot lang ako.” That’s when Cristine knew that her feelings for Ali ran deeper than mere infatuation. “Hindi na ‘to infatuation,” affirmed Cristine that time.
Asked what it is about Ali that she fell in love with, Cristine said it was his “personality and company.” While Ali revealed, “Na-in love ako sa personality niya, makulit, she’s very nice, she’s very generous.”
Ali said he’s even more enamored with Cristine now that they’re living together. “Mas in love ako ngayon feeling ko.” He explained, “well, siguro kasi ngayon everyday kami magkasama, mas malalim na ang pagkakilala ko kay Cristine.”
The two are obviously happy together as observed by Vice Ganda. However, they’re also refreshingly honest about having lover spats every now and then. Cristine voluntarily shared how she doesn’t it like when Ali would go out. “Mas gusto niyang lumalabas, ako mas gusto ko nasa bahay lang ako, pero gusto ko nandun din siya.”
When Vice asked her “’Pag lumalabas, naiimbyerna ka?,” Cristine quickly answered, “Oo.” Ali added, “Clingy siya e, gusto niya katabi lang niya ako.” Cristine admitted, “Gusto ko palagi ko lang siya kasama, gusto ko katabi ko lang siya.”
Ali revealed he knows when Cristine is disapproving of what he does when he comes home and she’s in their bed and her back is turned on him. Ali melts away Cristine’s anger by making her laugh. Cristine confirmed this, “’Pag sobrang galit ako, napapatawa niya ako.”
When asked sino ang mas mahirap kaaway, Ali said, “Siya. Mahirap kaaway yan.”
Cristine also said that when someone is obviously flirting or out to get Ali, she walks away. She recounted an incident where a woman openly flirted with Ali in front of Cristine and their daughter Amarah.
The two also admitted to having a private video which they also deleted immediately.
Celebrity