Kyla thanks fans for supporting her ‘On the Wings of Love’ version. 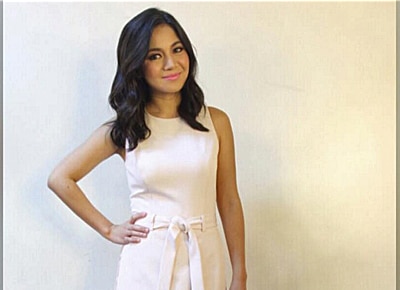 Kyla was on cloud nine as her teleserye theme song On the Wings of Love is a massive hit among soap opera viewers and OPM lovers. “Masaya ako dahil marami ang nakaka-appreciate ng song. Kinikilig talaga ako sa totoo lang na every time magpla-play ang song na ‘yun and nakakatuwa kapag may naririnig akong nagsasabing ‘You know mas nakakadagdag ng kilig pag naririnig namin ‘yung voice mo doon, kapag nagpla-play na ang On the Wings of Love,’” she said in an interview with Push.com.ph.
Kyla relayed that she herself is a fan of the OTWOL series and she is flattered that she got to sing the theme song of the series. “Siyempre nakakakilig ‘yun, nakaka-flatter din ‘yun na you know kahit papano tumatatak din sa kanila ‘yun and you know nakakapag-add ng kilig doon sa scenes. Kasi ako fan din ako ng OTWOL so nanonood ako ng show. ‘Yun nakakatuwa lang na ako ‘yung kumanta ng theme song ng sobrang gandang series,” she stated.
The Queen of R&B admitted that she had hesitations initially recording the song. “At first you know when they told me I was going to record the song I was a little hesitant because the song was recorded by ate Regine (Velasquez),‘yung version niya kahit simula bata hanggang matanda sobrang tatak na tatak ‘yun and it was such a challenge for me and for us in Star Records kung papaano namin kakantahin ‘yun na magiging sarili kong version ‘yung kanta,” she said.
Kyla remarked that she believes they have successfully put a different flavor to her version of the song and she thanks her entire recording team for the support and help. “I think we did that and I’m just really grateful that we had a great team and nakuha namin ‘yung gusto naming mangyari,” she said.
Main Photo credit to kylareal IG
Celebrity