EXCLUSIVE: What is Sarah Geronimo’s advice to Matteo Guidicelli on being a singer?

Matteo Guidicelli is set to release his album this November. 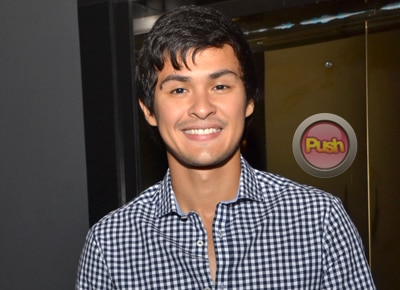 Matteo Guidicelli admitted that he feels overwhelmed as he is set to release his very first album. “It’s awesome, it’s the first time so all these feelings are all new so parang I never felt this way. Like yesterday we went to five different radio stations and we were just going around and promoting the song (his first single, “Ipapadama Na Lang”). Ayos eh, masaya, I just hope that people will enjoy it and the songs to come in my album so sana maging okay,” he said in an interview with Push.com.ph.
Why did he choose “Ipapadama Na Lang” as his first single off his album? “The message of the song is really nice and it connects to me very well,” he responded. The physical album will be released on November 27.  “But the week after that lalabas na sa Spotify, iTunes, lahat lahat,” he shared.
Matteo will also be staging a concert on November 28. He relayed that they are already rehearsing for the show. “Everything is good. We just had our rehearsals a few days ago and I’m very excited because Martin Nievera and more are going to be our guests and we have a cool line-up, with a cool bunch of cool songs, so I’m very excited.”
When it comes to transitioning from being an actor to being a singer, Matteo remarked that he is having the time of his life. “It’s fun. I’m just enjoying every moment of it. It’s fun because I go around with group, with a lot of people and you just have a good time all the time and you sing songs you like to sing and ‘yun it’s just fun. It’s just different,” he stated.
Now that he is also a singer, what is his girlfriend Sarah Geronimo’s advice to him? “She just lets me be [me]. She just tells me ‘From the heart, do everything from the heart.’ I have my own thing, and you know, my own way of doing things, so I am doing it in my own way,” he said.
Celebrity