EXCLUSIVE: Sarah Lahbati is excited over her first Kapamilya soap ‘Written in our Stars’

Sarah Lahbati will be working with Piolo Pascual, Jolina Magdangal, Toni Gonzaga, and Sam Milby for her first soap 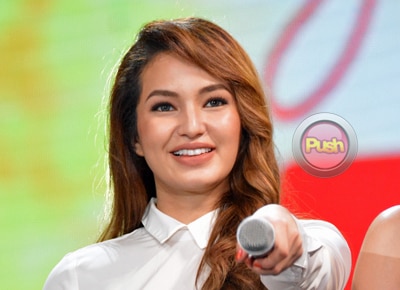 Months since she started being seen as part of a number of Kapamilya shows, sultry actress Sarah Lahbati is finally embarking on her first soap within the network.

Even before her confirmation came in, photos of Sarah together with Sam Milby did the rounds online.

In an exclusive interview with Push.com.ph, Sarah confirmed that she did a look test with the singer-actor for Written in our Stars.
However, she added, “Pero hindi pa kami naguumpisa.”
But Sarah did confirm that it’s already a sure project. Unfortunately though she has yet to get her hand on details about her role in her first Kapamilya soap.
How is she feeling about this?
“I’m excited, of course. I’m working with amazing actors for the first time. But they’re all talented and amazing actors. So I’m very, very excited for that,” she said.
The said soap will be headlined by Piolo Pascual, Toni Gonzaga, Jolina Magdangal, and Sam.
Set to be directed by returning Kapamilya director Andoy Ranay, the soap will also be the reunion project of Toni and Sam after eight years.
Meanwhile, Piolo, in a separate interview, expressed excitement over the fact that he will be working with Sarah for the first time.
"I'm so excited to work with her because ang sarap niyang panooring magsayaw. Ang bait niya at saka magaan," he said, adding that he is friends with the Gutierrez siblings Ruffa, Raymond, and Richard (Sarah’s long-time boyfriend).
"Nakasama ko siya before sa Malaysia, so okay naman. We are friends with Richard, Raymond and Ruffa. I'm excited to work with her," he added.
As to the persistent question, Sarah remained noncommittal if she’s now officially a Kapamilya or if negotiations about it happening are underway.
“Hopefully, hopefully yeah maging confirmed na very soon. Ayoko lang magsalita ng hindi pa tapos. Abangan niyo na lang,” she ended.
Celebrity