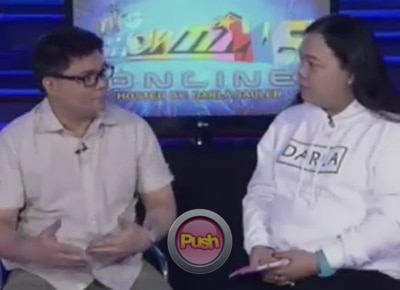 Today on It’s Showtime Online, the noontime show’s Business Unit Head Reily Santiago explained and addressed the complaint filed by the Gabriela party-list to the Movie and Television Review and Classification Board (MTRCB) regarding the segment “Nasaan si Mr Pastillas.” He said that the management received the letter yesterday, October 6 and that they will be having a dialogue with MTRCB chairman Atty. Eugenio “Toto” on October 13.

“They got a complaint from party-list Gabriela siyempre kung may complaint, they have to address the complaint. So ang MTRCB has to summon the program and then we’ll have a dialogue with the MTRCB with Chairman Toto,” he revealed said.

When asked about the letter sent by Gabriela, Reily explained, “I think they reacted sa complaint sa Twitter stating na bugawserye. From the letter that I’ve read from Gabriela, they reacted only from the complaints from the Twitter na meron nga raw nag co-complain sa Gabriela na to take a look into Showtime segment ‘yung (Miss) Pastillas.”

It’s Showtime Online host Darla Sauler expressed his own opinion about the complaint.

Riley agreed and said, “Oo, wrong context lang ‘yun. We just have to clear.” He then assured the fans of the noontime show that they will continue to give quality entertainment and that they’ll be having a new segment. He also said that the madlang people must watch out for the much awaited “Magpasikat” performances of the hosts which will start on October 19.

“Mapa-promise namin we’ll continue to give our fans the entertainment they want and (we hope they) support the sixth anniversary ng Showtime. Maraming pasabog, thank you for supporting Showtime,” he stated.