Is Piolo Pascual open to working again with KC Concepcion?

Piolo Pascual shares he had a 'good talk' with KC Concepcion in London. 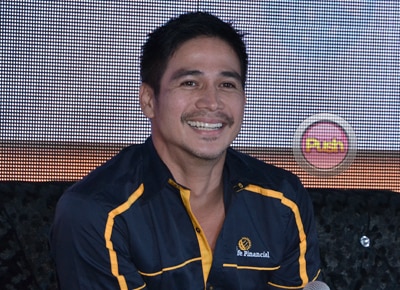 Piolo Pascual said that he is open to working with ex-girlfriend KC Concepcion if given the opportunity. According to the actor, he is actually okay working with anyone if it's what's best for the project. "Wala naman akong iniiwasang katrabaho. I'm all for what is good or what has potential sa box office or sa TV so I can definitely work with anyone," he said in an interview at the SunPIOLOgy presscon last October 6, 2015.
Piolo also shared that he had a conversation with KC during their ASAP in London show but they have not talked again since then. "We had a good talk in London. I think she just got back from her vacation as well at wala, wala pa namang communication since then," he said. The actor also reacted to the news that KC's father Gabby Concepcion approves if ever he would be getting back together with the actress. "Matatanda naman kami for us to make that decision so of course I respect that and I appreciate that as well," he said.
The actor also shared his thoughts on Sharon Cuneta saying that she is happy with his reconciliation with KC. “Sino ba naman ang ayaw ng ganon? Napakaliit ng industriya natin, napakaliit ng mundo ng showbiz para magkaroon tayo ng kaaway na iniiwasan. ‘Yun ang iniiwasan ko sa lahat, ayokong pumapasok ako sa trabaho with a heavy heart. I always make sure that I’m at peace with everyone sa industriyang ito because hindi natin maiiwasan na makasagasa rin, makatapak ng tao and I always make sure na kung sino man ang mga ‘yun pagdadasal ko, humihingi ako ng tawad. Kasi naman hindi naman tayo perpekto pero ‘yung malaking ano ‘yun it’s a thorn off my chest pag nagkakaroon ka ng ganon, nagkakaayos kayo, nagkakabati at nagkakapatawaran,” Piolo said.
The press also asked the actor why he has not settled down with someone yet. Piolo stressed that he is focusing on his career at the moment but he hopes to tie the knot sometime soon. "I am actually looking forward to settling down, it's just I'm not in the position to be in a relationship right now because as we all know I work everyday. I don't want to miss the opportunities that come my way kasi pag tumanda tayo hindi na pareho 'yung mga offers," he said.
Celebrity