EXCLUSIVE: Elisse Joson clarifies rumors about her being linked to James Reid 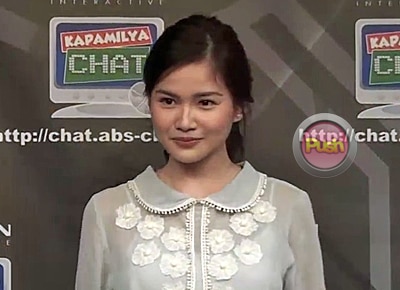 In an exclusive interview with Push.com.ph, Elisse Joson, who was romantically linked with On the Wings of Love star James Reid, vehemently denied that they’re more than friends.
“Ah well naka-trabaho ko po kasi si James (Reid) sa Wansapanataym: My App Boyfie so we became good friends naman after that. Actually during our taping days he’s a quiet type kasi e, pag nasa set dun lang kami nakakapag-usap ganyan pero we became friends naman after. We have common friends din kasi so ‘yun,” she said.
Because she was linked to James, Elisse got bashed by the fans of James and Nadine Lustre’s love team (JaDine). Elisse’s mother posted a screen captured photo of James’ text message where he was apologizing for the inconvenience that the bashers have brought to them. This photo was shown in a popular blogsite and made rounds online. She then said that it’s just her mother’s instinct to protect her kids when they are in trouble.
“I think it became bigger lang kasi his fans yata thought na there’s something more going on, kaya nung na ba-bash na ako and they were making rumors na nagkikita kami together doon ako na bash and then doon nag-react si mother. But some of the photos nga nakakagulat kasi it’s blurred and it’s really not me, in-assume nalang and then dun nag react yata si mother and I guess my mom like asked him na ‘Alam mo ba na merong nambabash ganyan can you do something about it’ kasi nga parang naaawa na lang si mommy ko sa akin. Pero I told my mom naman na ‘Mom it’s okay kasi it’s normal na ganyan let’s just stay quiet’ pero siyempre as a mother siguro hindi na napigilan so ‘yun and then that’s how like the messages got out siguro hindi ko na alam kung anong nangyari pero basically that’s it,” she explained.
To put an end to the rumor, she assured James’ fans that she and James are just good friends.
“We’re friends. We don’t see each other much anymore after like working together. Hindi na [kami] masyado [nag-uusap]. I think like both busy na rin especially him din he’s super busy so ‘yun. They shouldn’t worry kasi we’re not together or anything. We’re not boyfriend girlfriend wala talaga. I could see that he’s doing good with his career and I know him enough na he’s really focused on his career talaga,” she ended.

WATCH: Get to know more about Elisse Joson
Celebrity