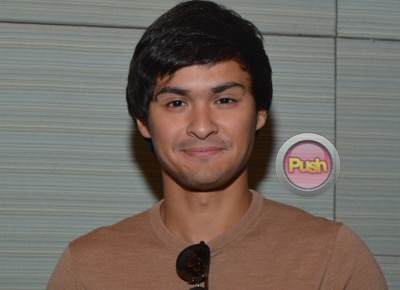 Matteo Guidicelli passionately defended KZ over the negative comments being thrown at her following her recent interview on Tonight With Boy Abunda.
Fans seemed to have misconstrued KZ and Matteo’s closeness after the former was asked if she was wooed by the latter who happens to be the current boyfriend of Pop Star Princess Sarah Geronimo.
Apart from the fact that the interview was cut before she was able to answer the question, the Your Face Sounds Familiar season 2 participant also failed to mention that she and Matteo are just friends.
Due to this, many wrote off the “Mahal Ko O Mahal Ako” as an attention seeker, especially since it is publicly known that she has a special someone as of the moment while Matteo is with Sarah.
“Alam mo, di kasi nila [ng mag tao] maintindihan. Kasi, when you're watching TV, kapag nakaharap ka sa TV, nakakakaba. Kapag may camera tapos si Tito Boy...” Matteo underscored during the recently-concluded press conference of his upcoming first solo concert titled MG1.
He added, “Naaawa ako kay KZ, ang daming bashers. Maraming bashers, maraming feeling may alam sila, pero wala naman talaga.”
To set the record straight, the Fil-Italian star underscored: “KZ and I are very, very good friends. She's one of the best hearts in the world.”
KZ was Matteo’s guest for his concert titled Dreamboys together with JC de Vera and Daniel Matsunaga.
Their closeness, according to Matteo, stemmed from the fact that they hail from the same province.
“She's a Cebuana, she's a Bisaya, that's why we're close. Alam naman natin kapag a Bisaya meet yung kapwa niya, parang automatic na close agad,” he said.
The Single/Single star presupposes “I guess na-misunderstood lang siya ng mga tao. KZ and I are close, and Morissette din.
“Kasi I want the Cebuano clan to bond, di ba? Kasi, kumbaga, represent mga Bisaya at yung mga Cebuano,” he added.
Matteo’s first concert titled MG1 happens at the Music Museum on November 28 together with guests Martin Nievera and Morissette.
Celebrity