EXCLUSIVE: JayR is excited about writing songs for Melai Cantiveros 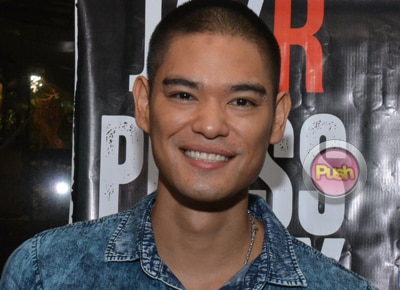 ‘Your Face Sounds Familiar’ alum JayR says he really loves composing original Pinoy music.
After a two-year hiatus from the concert scene, Jay-R shared why he is now finally ready to take the stage again. The country’s Prince of R&B is gearing up for his two-day weekend concert series Press Play on November 6 and 7 at the Music Museum. "I was kind of struggling with original music. At that time I had put up two revival albums and sa akin it’s not enough for me to do a concert of revival albums. Kaya ang tagal ko bago mag-concert ulit. So now that I’ve released my new album earlier this year. Elevated is my all-original album and it turned gold this month. So finally I said I’m ready to do a concert na and just to showcase the music I’ve been promoting all year and OPM,” he told Push.com.ph during the Press Play concert presscon held last October 22 at Annabel’s in Quezon city.
The 34-year-old artist said that even after more than a decade in the local music industry, he still feels nervous getting up on stage. "I have jitters! Kahit na Music Museum which only has 750 capacity I’m still scared na baka hindi ko mapuno (laughs),” he admitted. After his exposure on Your Face Sounds Familiar, many started to wonder if JayR would finally become a Kapamilya talent. ”I don’t know yet. Hopefully. I’ve just been very happily guesting on a lot of ABS-CBN shows lately. And I want to thank them for giving me that opportunity,” he said.
Apart from preparing for Press Play, JayR said he is also busy sharing his music with the industry. ”I’m always producing for other artists. I just finished some songs for Nyoy Volante, Melai Cantiveros, Rayver Cruz, and Denise Laurel this month. When it comes to music, when I’m making a song for somebody I definitely have to know their personality. If I don’t know them as a friend kung hindi sila talaga kilala, gusto ko yung I’ll talk to them and I’ll get to know what they like. I really want to cater the song to them. Ayokong gumawa ng song na parang pipilitin ko silang kantahin kasi hindi nila gusto yung subject or yung style so I really want to get the feel of what they listen to, sinong artist that they want to sound like. I interview them,” he explained.
Making songs for his former Your Face Sounds Familiar co-contestant Melai was a fun process for Jay-R. "So when I think about Melai gusto ko sa kanya very fun, very happy tapos I interview her and I get to know kung anong gusto niyang mangyari sa music niya and it’s very exciting actually. It’s very, very exciting kasi wala pang gumagawa nun sa Pilipinas. I don’t want to tell you everything pero for sure it’s very fun, very happy and funny ang mga songs ni Melai,” he said.
Even though he is known for R&B, JayR said he does not want to be stuck in one genre. "I’m R&B and that’s my artistry and the music that I sing and make for myself pero it doesn’t just stop there. I listen to a lot of classical music and jazz. So when it comes to different genres I like to think of myself as versatile. Kaya kong gawin hindi naman lahat pero more than just R&B,” he added.
JayR’s Press Play concert is happening on November 6 and 7 at the Music Museum at 8:30 pm. His special guests include Kris Lawrence, Mika Javier, Dee Jay Poblete, and Q-York. For ticket inquiries, call Music Museum at 721-6726, Ticketworld at 891-9999 or ALV Talent Circuit at 637-7016.
Celebrity