Janella Salvador: 'I used to be very shy'

Janella Salvador says she has grown in showbiz. 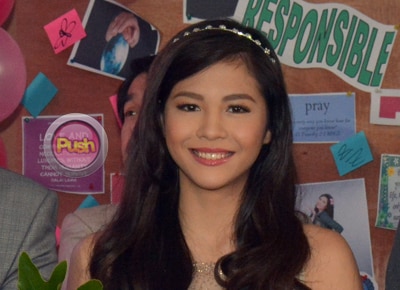 Janella Salvador admitted that she was not as confident as she is now before she joined the entertainment industry. In an interview with Chalk Magazine, the young actress relayed, " I didn't expect I'd get into showbiz because I used to be very shy, but now I'm here." Janella described her whole journey in showbiz as "amazing." With the popularity and the success that she is currently enjoying right now, Janella remarked that she is still the same person but more grown up now. "I'm still pretty much the same Janella. I'm still an introvert but I feel like I've matured so much in showbiz," she stated.
Janella is part of the popular all-girl group ASAP It Girls. The group is composed of Kathryn Bernardo, Liza Soberano, Julia Barretto, and herself. Despite the rumors that there are out to compete with each other, Janella stressed that they are the best of pals. “We don't see each other a lot because of our busy schedule but we're very good friends," she stated.
In an industry where physical appearance is highly regarded, Janella believes that true beauty is defined by one's character. "I believe beauty is in the eye of beholder. While we all have different views, I believe everything can be beautiful, that beauty generally comes from within." When it comes to building her character, she shared that she likes to engage in meaningful discussions with other people. "I like engaging in deep conversations, I like thinking and observing the world," she said.
After starring in the successful show Oh My G!, Janella is set to star in a Metro Manila Film Festival Movie titled Haunted Mansion. In a previous interview with Push.com.ph, Janella shared that they are almost done shooting. She also shared that it was always a dream to participate in the MMFF. "We're almost done actually. Mga 85 percent na-cover na namin so malapit na. And excited na rin kami kasi malapit na ring lumabas ang trailer. Abangan nalang 'yan. It was actually about a retreat ng mga students tapos doon na mag-a-unfold ang mga events. Actually dream ko naman talaga na magka-movie sa MMFF pero hindi ko naman ine-expect na sariling movie ko na 'yun. So, I'm just so happy," she stated.
For the full feature of Janella Salvador, read Chalk Magazine's October issue, still available in newsstands nationwide.
Celebrity