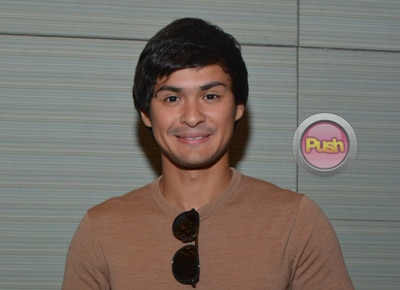 Matteo Guidicelli maintained his and girlfriend Sarah Geronimo’s previous stance on not working together, even if he’s staging his first ever solo concert titled MG1 just less than a week before hers.
But that doesn’t mean that Sarah didn’t give him some advice on how to be a performer.
“She tells me to use the heart. Love is what fuels each and everyone of us. So just use it. That burning desire of ours for love in our heart,” he said quoting Sarah during the press conference of his upcoming concert at the Music Museum on November 28.
Matteo said the decision not to include Sarah on his guest list which would include Concert King Martin Nievera and Morissette, was because “This is my first so I want to do it on my own.”
On top of his explanation, Matteo added that the Pop Star Princess might not also watch his concert.
“I don’t know, I guess. But she’s really busy with her concert. So marami siyang ginagawa,” he said referring to Sarah’s second concert this year titled From The Top happening at the Araneta Coliseum on December 4.
But he’s open to inviting Sarah’s Mommy Divine Geronimo should she want to watch.
The Single, Single star explained that as much as possible he wants his work to be separate from Sarah “separate because ang daming intriga, ang daming bashers, ang daming negative comments.”
He added, “I want to climb my ladder by myself. She’s my girlfriend, yes, but she’s not my partner in work. I want to work alone. She’s my inspiration in work but we want to keep it separate talaga.”
If anything, this move by Matteo according to him is his way of carving out his own niche in the business and not by riding on the “Kilometro” singer’s coattails.
“I’m still starting in the music industry. First album ko pa lang ito. First concert ko pa lang ito. I want do it on my own. I really don’t want people to think I’m using her or just following her. This is my dream since the beginning, noong hindi pa kami. So I want to do it my own way,” he said.
Even if people are continuously asking about him and Sarah and the possibility of them working together, the Fil-Italian star has, in a way, come to accept it.
“I hope someday people will understand and keep separate, especially with work. I hope someday. But, I guess, it's hard because that's reality. We can't turn around from reality, so we just live with and do what we can and do our best,” he said.
Matteo’s first-ever solo concert is happening at the Music Museum on November 28 with guests Martin Nievera and Morissette.
Celebrity