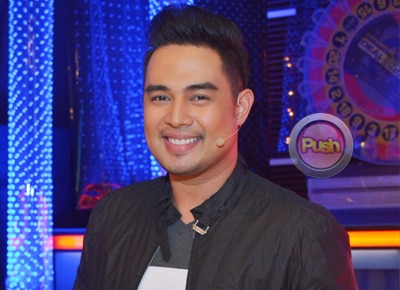 With only a few months before the local run of critically-acclaimed West End show Les Miserables, Jed Madela revealed that he has already reserved tickets for the show especially since it would feature one of his friends, Rachelle Ann Go, as part of the cast.
“I was actually texting her the other day nga kasi pareho kaming nagpapatayo ng bahay ngayon. So we keep in touch and I mentioned Les Miz. Sabi ko ‘How are you doing?’ Sabi niya she has finally found her niche in the industry,” he revealed in an exclusive interview with Push.com.ph.
According to Jed, he explicitly told Rachelle that he, along with the other Champions, are proud of her “na you know it was such a surprise for all of us na bigla mo nalang iwan ang career mo and suddenly became big in West End.”
He added, “And for you to come home is something that we all look forward to. Actually nagpa-reserve na kami ng tickets for Les Miz.”
If there’s anything that he finds most endearing about Rachelle Ann, it’s the fact that “she never forgets.”
“Kasi we have this ‘champions’ Viber group and lahat kami nagkakagulo lang diyan. Si Erik [Santos], si Christian [Bautista]. Si Sarah [Geronimo] minsan pati sila Jimmy [Bondoc]. Lahat ng champions andyan so we’ve kept our lines intact lagi,” he said. “So hindi lang kami colleagues we’re all really good friends.”
As someone who has taken on the international scene before when he won the World Champion of Performing Arts (WCOPA) in 2005, Jed interestingly said he prefers not to pursue an international career, even if he admits that he’s open to those opportunities.
“I’m more comfortable here. Not just for myself but for other new artists,” he said.
Part of his goals of late is to hone younger talents and help them achieve their musical dreams.
“‘Yun ang pinaka-goal ko ngayon eh, to give back. To help these new artists realize their dream kahit papaano kasi it’s really hard. I’ve been in their shoes. I’ve been in a difficult position na walang sumusuporta, walang opportunities,” he explained.
“In my position now, I can be an instrument for them to get to realize their dreams. So through WCOPA, I’m a mentor and I’m a talent scout now and every year we try to encourage kids and young ones, young artists to come out and you know just show the world their talent,” Jed added.
Celebrity