Liza Soberano talks about loving, waiting, and choosing whom to love

Liza Soberano will pick the person who makes her dreams come true. 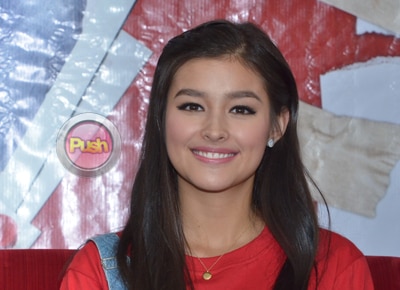 At 17, Liza Soberano has been lauded for her distinct sense of maturity which became most apparent now that she’s finished romantic-drama Everyday I Love You together with Gerald Anderson and Enrique Gil.
As she plays the role of smitten and then torn Audrey in the film, Liza, during the recently-concluded blogger’s conference, opened up about her thoughts on love.
“I show my love by telling and also by spending time with them all the time, everyday,” she said when asked how she shows her love. “I try to make them feel special and happy in different ways. By thanking them or commending them on what they’ve done right. Things like that.”
Like her character Audrey who patiently waited day-by-day for her comatose boyfriend Tristan played by Gerald to wake up, Liza said she could imagine herself doing the exact same thing.
“Ako opo. Because when he went into a coma, we were already together and deeply in love. So, of course when something bad happens to the person you love, you want to be there by his side throughout all the bad times and the good times,” she said.
The ASAP It Girl member even stressed that when you love a person, you always want to be there for him.
“And ako pa naman ‘yung type ng tao na if the person I love is in need of help, I’m there to support and help as often as I can,” she added.
A central question to the story came when Liza’s character Audrey got attracted to Ethan even if she’s still in a relationship with the comatose Tristan. The former makes her dreams come true while the latter is the man of her dreams.
If she were in the same kind of situation wherein she would have to choose, who would she pick between them?
“So, for me, I would always choose the person who makes my dreams come true because the dream of person is just to be happy,” she said.
She explained that while we want something so bad, there’s always the chance that once we get it, things won’t turn out how we imagined or hoped it would be.
“For me, our dreams change constantly so siyempre kapag bata tayo ini-imagine natin ‘Ay gusto ko ganito, ganyan.’ Pero when you grow up, you start realizing that you want different things.  And papaano ‘yun kapag tinatak mo sa isip mo na you just want this kind of man but then you meet him one day parang ‘Ah hindi pala ako masaya.’ Parang, he’s what I wanted but I’m not what he wants, parang ganon. So in order for you to work that out parang you have to adjust to what he wants, parang ganon,” she explained.
Catch Liza, Enrique and Gerald’s latest movie Everyday I Love You starting on October 28 in theaters nationwide.
Celebrity