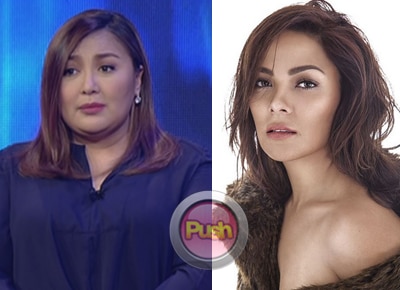 On Tonight with Boy Abunda, Megastar Sharon Cuneta opened up more than she ever has on the subject of her relationship with her daughter KC Concepcion.

Asked about what she has learned from her relationship with her daughter, Sharon explained their family got broken at the time when KC was only two and half years old. This was the time Sharon and KC’s dad, actor Gabby Concepcion, decided to separate. Sharon shared that she had to teach KC how to be independent while she “had to put food on the table.”  Because of this situation, Sharon said, “something had to give.”

Sharon continued, “I had to be the provider and I couldn't obviously be with her, unlike now na I can be more relaxed and I can spend as much time. So, I feel bad because in a way I feel I have shortchanged my daughter in certain areas. But I think I have taught her the importance of independence and she said this, ‘my Mama said you don't need a man to provide for you.’ So, she listens. She knows how to invest, she takes care of her earnings and I don't have to worry about her.”

Sharon then revealed that working and taking care of money is something that she’s learned from her Dad, the late Mayor Pablo Cuneta, and something that she passed on to KC. Sharon went on to say that she and her Dad “were the workers in the family.”

She further explained, “KC and me, we are like night and day. There are differences. Hindi kasi laging pareho kayo ng ugali ng anak mo. But my daughter is a good girl. I think it’s normal na nagkakatampuhan ang mag-ina.”

She also says that for those who advised her to let go of KC, “Letting go is not the problem. I have let go of my daughter. I taught her to be independent. I would have preferred her to stay with us but she preferred to live on her own and she (even) asked me to join her in choosing her condo.”

Sharon said it’s important to “agree to disagree with respect.” Expressing their love for each other is also not the problem because as she divulged, “ma-I love you kami sa bahay.”

Asked if she expressed this to KC, Sharon said, “No, kasi parang ang hirap minsan to keep your voices low when you’re discussing kasi we’re both very bullheaded and strong-willed. She got that from me and I got that from my Mom and my Lola.”

Sharon added that she and KC have a lot of love for each other but she’s honest enough to admit, “I get jealous I think, kasi right or wrong these are my feelings-- I feel I sacrificed so much and I just want to feel that ‘oh, my Mama’s my world,’ like when (she’s) a little younger.” Sharon likens what she wants to the close relationship of host Boy Abunda to his mom.

The Megastar reveals that when she was hospitalized, she asked for KC to come to the hospital and when she did, “we did not talk about anything except I miss you, I love you. Wala nang usapan because I’m her Mom, no matter what happens to her I will die and kill for her. She’s my daughter. I love my daughter.”

WATCH: Sharon Cuneta on tampuhan with KC: "I will kill and die for her"
Celebrity