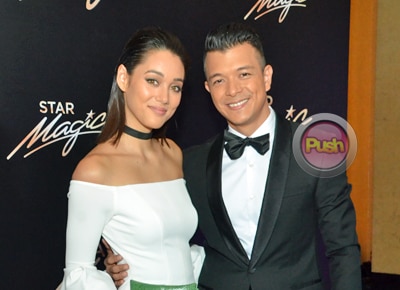 Almost five months since the remake of soap Pangako Sa’Yo started airing with Kathryn Bernardo and Daniel Padilla as its lead cast, original version cast member Jericho Rosales still continues to get quizzed about his opinion of the remake.
If in the past he offered pieces of advice for the new cast, Jericho, during his launch as the face of local restaurant Kuya J in SM Cebu, reiterated what really matters. For him, it’s not really the cast.
“You know it’s different. It’s a different generation. Hindi naman malayo sa generation ko,” he joked.
“Iba ‘yung audience nila sa naging audience namin. Some say that ours is better, some say ‘yung sa kanila but it really depends on the taste of the viewer,” Jericho explained.
The Bridges of Love star reiterated that his wife Kim Jones is actually a big fan of KathNiel.
“As a matter of fact, si Miss Jones ay fan ng dalawa. She loves to watch Filipino love teams sila Quen [Gil] at Liza [Soberano], Kim [Chiu] at Gerald [Anderson],” he said.
Having mentioned his wife and with his newest endorsement promoting the concept of families eating together, Jericho was asked when he’s planning to start one.
This question comes at a perfect timing when a lot of newlyweds are already expecting their first-borns. Among them were Bianca Gonzalez and JC Intal, Marian Rivera and Dingdong Dantes, and Isabel Oli and John Prats.
The couple have admitted to have packed work schedules which could mean little time to start a family. To this, Jericho clarified, “Yeah we do have time, we make sure that we have time for each other. That’s the reason kung bakit hindi muna kami nagbi-baby eh. But there’s a perfect time for that.”
As of the moment, Jericho said they are enjoying the fact that they both can work hard over the things that they love.
“We should enjoy what you’re working for. I work hard. She works hard and you know we can travel di ba? Right now I really want to give Kim the best that I can. For me, I support her. She loves fashion. She has a creative mind. Whenever she’s at home she’s always doing something,” he explained.
With their tight schedule and different interests, Jericho takes comfort about one thing about his wife.
“The best thing I love about Kim is she is really crazy about me. So what I can do? Jackpot ako di ba? I can’t complain,” he ended.
Celebrity