Gerald Anderson hopes that the public would believe him about his new ‘inspiration.’ 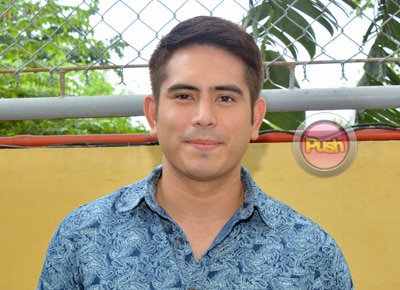 Months after his breakup with Maja Salvador, Gerald Anderson finally spoke up if he has finally opened up his heart to someone new.
Gerald, during the recently-concluded blogger’s conference of his upcoming film Everyday I Love You together with Liza Soberano and Enrique Gil, claimed that he’s currently inspired by life even if “that’s not what people want to hear from me.”
“No you know what, in love ako with life. Kakasabi lang ni Direk [Mae Cruz-Alviar] because hindi natin alam baka paglabas ko ng tent I could die or bukas or mamaya kung ano ang mangyayari,” he started.
Although according to Gerald his project with LizQuen is his last one for the year, he still wants to accomplish a lot of things.
“May mga personal projects ako na gustong gawin at may mga personal movies ako na gustong i-produce,” he said.
Aside from that, Gerald said he also has other non-showbiz things that he hopes to give his attention to such as “I have this search and rescue personal K-9 team para kapag nagka-earthquake at flood. Meron kaming team na tutulong sa iba. ‘Yun ang nagpapasaya sa akin.”
He added, “Honestly and truthfully sana maniwala kayo talaga. I’m inspired by that.”
Prior to that statement, Gerald waxed nostalgic when asked about the greatest things that he did to achieve his dream.
After responding that “joining PBB” was his biggest move that led to where he is right now, Gerald turned serious when he elaborated that he has a lot more things to do despite being in the industry for 10 years now.
“All this money. All this fame. All these cameras. This is all going to go away. Hindi ko naman ito madadala sa grave ko, sa hukay ko. What I on leave behind is kung ano ang value nan na-contribute ko sa mundo, who are the people I helped succeed. So medyo corny,” he said.
Gerald first mentioned about his ongoing journey for “self-improvement” as part of his “many battles” in becoming a “better man” during the finale press conference of his soap Nathaniel.
He continued, “Kaya nga noong isang araw sinabi ko kay Direk, parang nasa stage na ako ng buhay ko na, like I said 10 years na ako, na [nagiisip ako na] ‘Ito na ba ‘yun? Is this what I’m going to do [for the rest of my life]?’”
While he recognizes that he is “blessed” to have such kind of job, Gerald didn’t deny feeling that “Minsan parang ‘Ito na ba ‘yun? Wala na ba akong pwedeng gawin?’ I have that question in my head everyday, araw-araw.”
He even went as far as claiming that he’s also dreaming of being able to help alleviate poverty and achieve world peace someday.
Celebrity