Xian Lim talks about his next international project 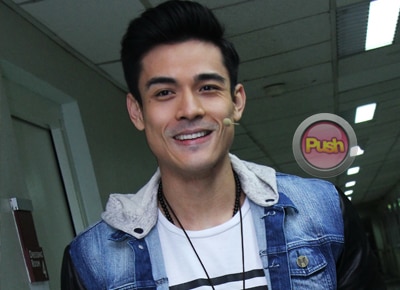 After providing the voice of Paddington in the Hollywood movie Paddington last year, Xian Lim revealed he is part of another international project as one of the celebrity endorsers of Asia’s largest video-on-demand service, HOOQ. The Kapamilya actor recently shot three commercials for the brand with Jessy Mendiola that had them recreating iconic scenes from three blockbuster movies. “I’m just really thankful sa lahat ng blessings na pumupunta sa akin and I’m really excited for all my supporters and everyone na mapanuod nila itong ginawa nmain na tatlong pelikula dahil dito nag-enjoy lahat. And I can’t wait for them to see it. Meron tayong Jerry Maguire, Zorro, and Pulp Fiction,” he shared during the HOOQ event held last October 8 at URBN Bar in BGC.
Xian said he learned a lot from working with a foreign crew that included an Irish director and an Academy Award winning Director of Photography while shooting the commercials. “Yung scene namin sa Zorro ang galing eh, ang galing nung approach. It feels great kasi nung nandun kami we learn a lot from each other. They do things differently and just working with people from all over the world like Ireland and the States. Our director was from Ireland. Talagang it was a privilege doing this whole project,” he said.
Being reunited with his Must Date the Playboy co-star made the shoot more enjoyable as well. “Yung mga eksena kasi na ginawa namin it was played on loop para makuha talaga namin yung mga eksena sa movies na yun and it was really fun. We were just enjoying the whole time. Wala ng hiyaan sa amin,” he said.
Currently shooting for his upcoming teleserye in Palawan, Xian shared a recent accident on set that had him walking in pain that day. “So we had a scene for The Story of Us and paahon na ako sa shore and my last kick merong isang malaking sea urchin na naghihintay dun sa paa ko. And right after that I was rushed to the clinic tapos yun binigyan naman nila ako ng proper medication. Pero sobrang sakit (laughs),” he recalled.
Xian said that he doesn’t mind their hectic shooting schedule because he knows the viewers will enjoy his new soap with Kim Chiu. “We just came back from Palawan from kanina and I guarantee mag-e-enjoy talaga yung mga manunuod not only because of the scenery, not only the feel but kumbaga ito yung inaabangan nila eh. Makikita na rin nila sa wakas. I’m really excited and Kim is also excited,” he added.
Celebrity