Karylle says husband Yael Yuzon was ‘open-mind’ about what happened. 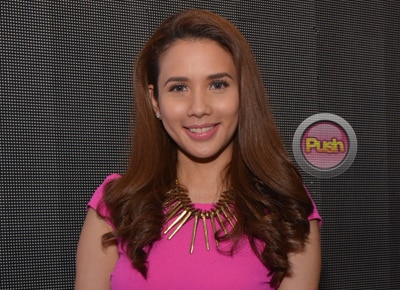 Karylle finally spoke up about the “kissing scene” between her and co-host Vice Ganda that happened during the anniversary kick-off of It’s Showtime last Saturday, 26, 2015. When asked if she was surprised when the unkabogable star locked lips with her, she replied, “Kami ni Vice palagi kaming nagbibiruan na magki-kiss kami or what pero as an actor I don’t like to feel… alam mo ‘yung too predictable so I allow myself space to be surprised. Pero kumbaga kami nag-uusap kami. Alam naman namin na we’re acting kasi kumbaga extension ‘yan ng Sine Mo ‘To (It’s Showtime’s segment), live music video, whatever, ginagawa talaga namin,” she said in an interview at the grand launch of iShine Talent Camp 4.
She further stressed that as an actress and as a performer, she allows herself to be surprised in the show. “Hindi ko alam na magagawa niya o hindi [na i-kiss ako]. We talk about it naman or everything, lambingan ‘yun eh, usually nose to nose. Kumbaga I just allow myself space to be surprised. Ayaw kong isipin na ‘Yes mangyayari ‘to’ even when I act, ayoko ‘yung masyadong naka-plan kasi gusto ko ‘yung mas natural, na nagugulat na reaction para mas totoo.”
Karylle is thankful that her husband Yael Yuzon was very open-minded about what happened, saying, “Nandon siya. Okay naman si Yael kasi lumaki ‘yan na nagthea-theatre siya so palagi kong sinasabi ‘Buti na lang ikaw ‘yung open-minded at ako ‘yung actor kasi kung baliktad hindi ko siya mata-take, mas magiging ako seloso.”
The singer-host said that Yael has always wanted her to be independent and make her own decisions. “I think for me I like that Yael is able to express himself without anyone editing him. Para maintindihan ng mga tao na he’s very open minded, ang pinakamalaking away namin is ayaw niyang hindi ako nagda-drive, he wants me to be independent, ‘yung parang to have my own mind, to make my own decision kasi people are asking ‘Bakit hindi nagpaalam? Bakit ka pumayag?’ For him kasi equal ang tao eh.”
There were news previously circulating that Yael disapproved of Karylle’s team-up with Vice but she stressed that Yael was just misunderstood before. “Actually that’s why I’m happy na hindi siya naging tahimik because he’s able to sepak his mind and ngayon naintidihan ng tao what his voice is, what he feels about certain issue. Dati kasi na misunderstand and na misinterpret lang siya pero hindi niya sinabi ‘yung alam mo ‘yun [na ayaw niya],wala naman talagang ganon. Na misinterpret, na misunderstand. Siyempre isa siyang rakista, you have your own notions of how he thinks and how he feels.”
Karylle also addressed the issue of the bashers who posted negative comments about her and Vice. She said, “For me right now I find that it’s a bit sad that there’s actually a word ‘basher’ and ‘hater’ so I think it takes too much every from a person so parang I just wish the climate of the country was a little more cool, more happy. I mean in anything siyempre may traffic, whatever, parang we’re always complaining. I think we should be more proactive and look for solutions. Parang I think complaints, hating and bashing should be like the least of our concerns because it takes too much of our day and parang nagtu-tumble down sa lahat ng mga ginagawa mo sa buhay.”
Celebrity