James Reid claims he is already good friends with Joseph Marco despite the short amount of time that they’ve worked together. 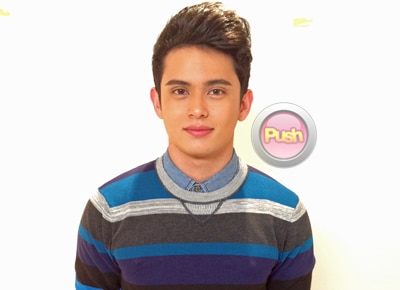 James Reid said he really put in the effort to prepare for his second film with Nadine Lustre, Talk Back and You’re Dead, which is still raking in ticket sales. “We had workshops together. We completed Master’s Acting Workshops,” James said in an interview with Push adding that “I personally asked for character workshops, workshops designed to get you into character before we shoot. It really helps.”
Instead of the fight scenes or the heavy scenes, the Filipino-Australian young actor cited a different part of the film that got him a little worked up. “I didn’t really have that hard of a time. I mean, the hardest part was Tagalog probably for me. I enjoyed all of it, really,” James said.
His second movie is quite different from Diary ng Panget. For one, James has bared a lot of skin in TBYD and he and Nadine shared a lot of kissing scenes on this movie as well. “Yeah there are a lot and it’s really part of the book so, that’s why,” James said of his kissing scenes with Nadine. From a guy’s perspective, he admitted that he does “look forward” to their kissing scenes because “They’re fun.”
Jadine will be seen in the follow up installment of TBYD. According to James, they are still in the dark as to what is going to happen in the sequel.
Will he be more daring in the next film? “I’m giving the people what they want. I had fun. I’m comfortable with my body so. [But] I think so far I’m showing a lot of skin but it’s up to Boss Vic [dell Rosario],” he explained. He adds though, “Personally I don’t think so. I do have limits. I could take off my shirt, for me that’s my limit for now. I’m only 21.”
In TBYD, Joseph Marco played his rival for the heart of Nadine’s character. To this he said, “Joseph has become a really good friend of mine. You know it’s only been less than a month and we’re already so close.”
With the good reception that Joseph has been getting of late due to their film, does he feel threatened that he might come between his love team with Nadine?
“I’m not threatened or anything. We want to give fans what they want. So it’s okay with me,” he said.
Celebrity